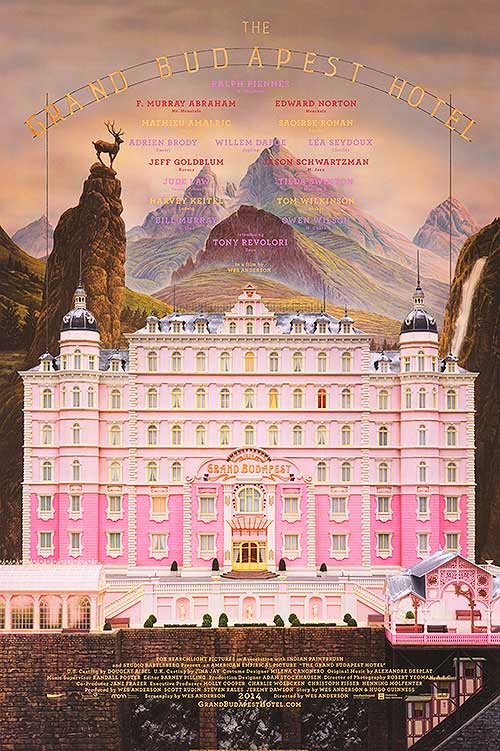 Ho ho, it’s Burl here, reviewing a new Wes “Moonrise Kingdom” Anderson picture, The Grand Budapest Hotel! I was really looking forward to this one, because its particular milieu, which is to say Central Europe between the wars, is a time and place which fascinates me and always has! Ha ha, such rich and marbled tales have come out of this twenty-year period: curdled fairy tales arising from a new era of fatalism!
Evidently Anderson feels the same way, because he’s plunged into this storied environment with the enthusiasm of Steve Zissou exploring a sea cavern! Ha ha, like some other stories I know and love, specifically Roald Dahl’s “The Wonderful Story of Henry Sugar,” The Grand Budapest Hotel contains stories within stories, each of them reaching farther back in time! (Ha ha, I suspect this movie to have been influenced as much by Dahl as it was by Stefan Zweig and Bruno Schultz!)
The core story, told by F. Murray “Inside Llewyn Davis” Abraham to Jude “Sherlock Holmes: A Game of Shadows” Law, concerns the legendary, perfumed concierge of the titular hotel, M. Gustave H,. played by Ralph “Skyfall” Fiennes! He takes on a protégé, young lobby boy Zero, and is promptly accused of the murder of an old lady, one of the many old ladies with whom he dallies! Soon he’s on the run, and a veritable galaxy of characters are either chasing him (the old lady’s savage, greedy son, Adrien “Midnight in Paris” Brody, his murderous factotum Willem “Streets of Fire” Dafoe, and a policeman played by Edward “Fight Club” Norton) or helping him (young Saoirese “How To Catch A Monster” Ronan, a baker’s assistant; Jeff “Into the Night” Goldblum, a lawyer; Mathieu “Cosmopolis” Amalric, a butler; Harvey “Mean Streets” Keitel, a prisoner; and Bill “Meatballs” Murray, another concierge and a member of The Society of the Crossed Keys)!
A curious thing about many of these actors is that almost all of them have worked for David Cronenberg at one time or another! Ha ha, I found that curious and amusing! At any rate, the picture is fast-paced and madcap and as overstuffed as a goochie-cake! It may lack the immediate engagement invited by some other Wes Anderson pictures, but there sure is a lot to look at! Ha ha, I liked the (ostensibly) old-style trick effects, straight out of Guy Maddin’s great picture Careful or even Ernst Lubitsch’s Eternal Love, both mountain movie like this one; the funicular train (which didn’t get enough screen time if you ask me!); the sudden moments of violence or gore; the performances; and the great scene with all the concierges calling one another!
Altogether a fine and entertaining night out at the movies, and I’m certainly going to see this one again, just to catch all the details and gags I must have missed the first time around! I’m going to give The Grand Budapest Hotel three and a half severed fingers!
Posted by Burl at 23:07