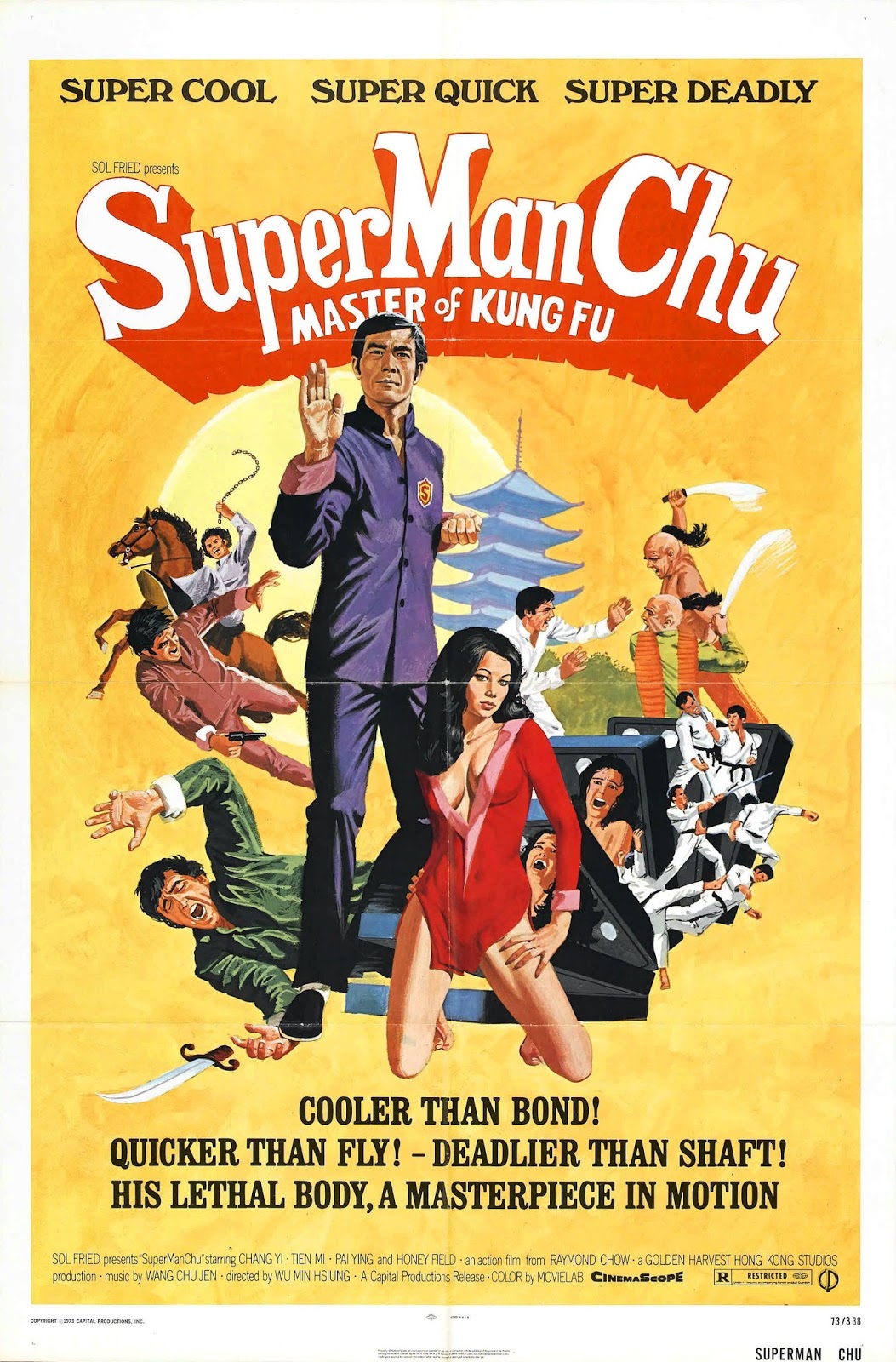 Ah! it’s Burl! Ha ha, yes, I have another review of a kung-fu spectacular for you! This one is called SuperManChu, and it’s so similar to another picture I watched recently, Blind Fist of Bruce, that I’m already having trouble telling the two apart! I hope that doesn’t seem culturally insensitive, ha ha! Please recall that I’m in no way an expert on the kung-fu pictures, but I’m trying to educate myself by watching those films reputed by all to be the best! Thus, SuperManChu!
It’s got a pretty simple story! A criminal mob led by a pencil-moustache happens by a family-owned restaurant, orders some food and then molests and kills everyone! They leave just as the son, SuperManChu, is arriving home! Ha ha, he finds the corpses of his family and swears violence revenge!
SuperManChu, an expert knifesman, finds the gang just as a suave stranger arrives in town! The stranger fights the gang, then joins them, but it’s all a ruse because he’s an undercover cop sent to arrest the pencil-moustache! Ha ha, sorry for the spoiler! Anyway, it’s a situation very like those found in John Woo pictures, where two strangers, maybe not quite on the same side of the law, are forced, despite their oil-and-water personalities, to team up against a common enemy!
Of course there are fights and more fights, and nearly everyone comes to a sticky end, and because the version I watched was not letterboxed it was once again a case of watching limbs flailing in and out of an otherwise empty screen! Ha ha, this version wasn’t even pan-and-scan, because there was no panning and no scanning, and during the fight the characters would frequently move off one side of the screen or the other, creating a sort of Garfield-Minus-Garfield effect that was kind of neat!
Well, SuperManChu and the cop eventually team up, after a fashion, and it all ends up with a double fight at Whirlwind Beach! Ha ha, where else? And the tide was out at Whirlwind Beach that day, really out!

As for the kung-fu, there are a number of terrific little moves and a marvelous variation in the methods! The cop likes to throw coins at people, and he never seems to run out, though his slim-fit suits would hardly seem to have room for much pocket change! And he ends up using a swish-rope in novel fashion too! SuperManChu sticks mainly to his knives, though he’s handy with fists and feet too! He’s a pretty humourless guy, understandably enough, and is frequently dressed in black! The cop is a little more easy-going! Ha ha, they make an okay team!
It was a pretty enjoyable picture, not great, but engaging! The presentation was lacking, but that wasn’t the movie’s fault! Anyway, I tend to think of these VHS viewings as the closest we can get nowadays to a real grindhouse experience! It’s a question of reframing: the frustrations of the screening itself are no longer odd smells, lumpy seats and drugs-crazed maniacs, but poor transfers, stubby frames and muddy sound! Anyway, I’m going to give SuperManChu two stolen swords!
Posted by Burl at 22:07