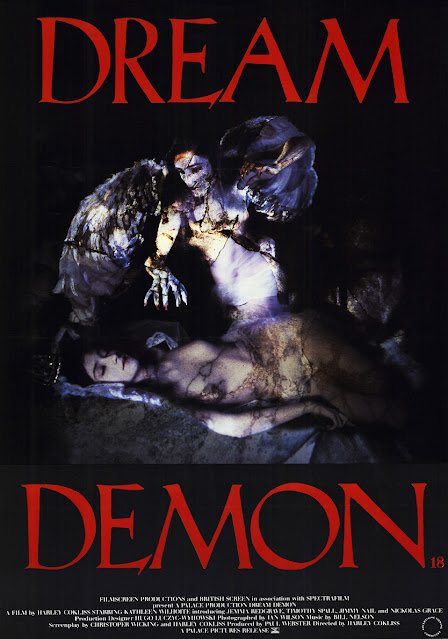 In the shadow of Freddy it’s Burl, here to tell all about a British knock-off of A Nightmare on Elm Street! Maybe that’s not completely fair – though it’s a rubber-reality dream picture for sure, and approaches its dream sequences much in the style of any 80s horror picture, it has its own non-Kregeresque business going on, though the exact nature of that business is a bit opaque! Yes, I’m talking about Dream Demon!

It comes from the director of Malone, and I won’t try spelling the fellow’s name, because I notice he himself spells it differently from picture to picture! The story is set in London, and our heroine is Diana, a young bride-to-be played by Jemma Redgrave! Her fiancé is a comically upright and squarejawed Falklands war hero, or I should properly say “hero” because everything about this guy is in doubt, called Oliver, played by Mark Greenstreet! I’ll give away now that he turns out to be a total jerk, but that doesn’t spoil much because he has that aura right from the beginning!

Diana is being plagued by pre-nuptial anxiety dreams in which Oliver abuses her at the altar, and she in turn decapitates him, which is frankly no more than he deserves! In her dreams the world is lit like a rock video, and she is plagued not just by Oliver, but by bugs! Meanwhile a pair of tabloid reporters set their sights on her for some reason, crowding her at her doorstep and asking impertinent questions! This duo is a reporter played by Jimmy Nail from Howling II and a crude, moon-faced paparazzo essayed by Timothy Spall, whom we recall from Dutch Girls and Gothic! The apparently near-friendless Diana then gets a new acquaintance in the form of Kathleen Wilhoite, more or less playing the same sort of psychic punkette she played in Witchboard! Wilhoite’s Jenny shows up at Diana’s door because that’s the house she lived in as a child, and where she experienced some trauma she can’t quite remember before being spirited off to America!

Whether Jenny has some psychic triggering ability or Diana is a powerful dream empath, or it’s something to do with the house is never made clear, but the upshot is that soon Diana and those in her orbit (except Oliver, who I suppose is meant to be so thick and imagination-free that he doesn’t even dream) are spending half their time in the oneiric netherworld of Diana’s subconscious! The tabloid jerks, especially the photographer, become the Freddy stand-ins that pop around corners and scare her; Jenny, meanwhile, has had enough and very sensibly decides to flee the scene, but it’s not so easy! By this time Diana doesn’t know whether she’s dreaming or not, and Jenny falls into a long reminiscence, or perhaps dream, of her nasty sculptor father, played by Nickolas Grace from Salomé’s Last Dance, chasing her around and forcing her to pose for a gravestone sculpture he’s making!

I said earlier that this was a Nightmare on Elm Street pretender, and indeed it is in many ways, but I should qualify that by saying that its dreams are much more subtly insinuated into the narrative than in the Freddy pictures! Sometimes the lighting changes, or the set becomes weird and you know it’s a dream, but other times we just ease into them and can’t be sure until something oddball happens! The debit side to this approach is that there’s rarely a whole lot of imagination pumped into the dreamscapes, and the reluctance to get funky deprives the picture of the pep it might otherwise have displayed! Clearly this was a choice made early in the production, and in the end it comes off a more mature work than the Freddy pictures, but it’s not one of those beloved gloop specials the 1980s were so good at turning out!

Still, it has some gross-out moments and trick effects, most of them centering around Spall’s vile photographer character! But the filmmakers never really cracked their narrative problems or seem to have decided what their picture was really about! Obviously it’s got a good deal to do with the virginal Diana’s sexual anxieties, but beyond this dime-book Freud, as Orson Welles would call it, there’s not a lot of there there! I did like the little coda in which the tabloid jerks’ ultimate fate was revealed, and believe me when I tell you that you won’t see that one coming! I give Dream Demon two plates of red spaghetti!