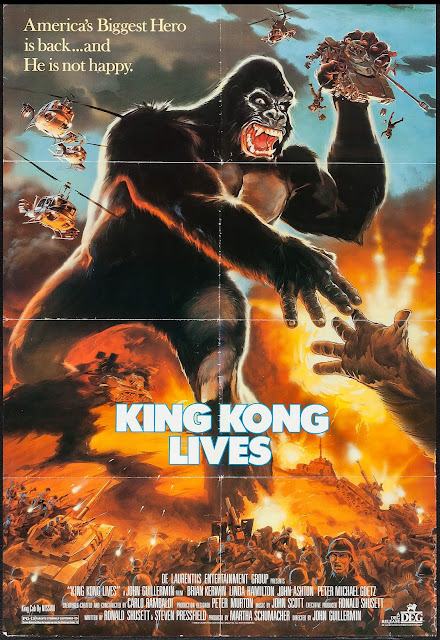 With a mighty roar and a monkey two-step, it’s Burl comin’ at you with sweet monster madness! Ha ha, today I’m reviewing a movie I dutifully went to see back around Christmas of 1986, because in theory there’s nothing wrong with going to see monsters and destruction on the big screen! In theory! And that theory gets a bit of a stress test when the movie in question is King Kong Lives! Ha ha!

Yes, this is the work of Dino De Laurentiis, who wanted to make a direct follow-up to his big hit from a decade before, the 1976 King Kong! In fact he starts this with footage from the ’76 picture, showing the mighty ape tumbling from the World Trade Centre – but, ha ha, turns out that didn’t kill him! No, he’s been on life support in a big warehouse, and now Dr. Amy Franklin, the world’s leading expert in giant ape transplants, played by Linda Hamilton from Dante’s Peak, is ready to fit Kong with the biggest Jarvik-7 ever seen! Ha ha, let's call it the Jarvik-7000! The problem is, to survive the procedure Kong needs a blood transfusion, but who could possibly be the donor?

Luckily at that moment a generic adventurer played by Brian Kerwin from Hometown U.S.A., sporting the generic adventurer name of Hank Mitchell and wearing the requisite generic adventurer hat, is in the wilds of Borneo running from a giant hand! The hand is attached (allegedly) to a Lady Kong, and in short order she’s been captured and shipped to a warehouse nearby to Kong's, and then Kong gets his blood transfusion and his artificial heart, which is inserted somehow without leaving a visible scar on Kong's mighty chest! Of course the apes can sniff each other out over vast distances, and once they're aware of each other, nothing, not chains, not guns, not front-end loaders, can keep these aspiring lovebirds from each other’s company!

They escape into the hills, and hard-case Colonel Nevitt, played by John Ashton from Some Kind of Wonderful, is sent after them! Of course Dr. Amy and Hank Mitchell team up in an effort to find them first and prevent the trigger-happy armyman from harming the super-simians! The apes, meanwhile, can’t keep their paws off one another, and soon it's a case of sweet monkey love, ha ha! There’s concurrent human bohankie occurring nearby in the sleeping bag occupied by Dr. Amy and Hank Mitchell! But soon the army comes with their tanks and helicopters and knockout gasses, and Lady Kong is captured!

Kong himself takes to the hills, where he broods and plans and eats gators and is briefly trapped by rednecks out for a wild time! He escapes their trap and takes a bloody vengeance upon the hillbillies, breaking one of them clean in half and popping another in his mouth like a junior mint! He then busts his ladyfriend out of the missile silo they’ve put her in, and of course it turns out she’s pregnant! Ha ha, Kongratulations! After a final climactic ruction, during which the big guy stomps Col. Nevitt into the loam, Lady Kong gives birth to a gorilla, and the giant ape life cycle continues!

Kong himself is played by Peter Elliott, who essayed many an ape in pictures like Greystoke and Congo, and here he sports a perpetually bewildered expression thanks to the stiff mechanics of Carlo Rambaldi’s apesuit! But I think he might give the best performance in the picture anyway, ha ha! The rest of the actors seem trapped in some weird limbo where they want to look at once like they’re taking this material seriously, and are also completely aware that it’s ridiculous! In trying to have it both ways they end up delivering bland and lifeless performances, devoid of the ham and the pep this kooky movie requires!

It’s a bad movie, of that there can be no doubt, and a misguided one too, but I’d be lying if I told you it had no entertainment value! There’s some good model work in it, though not all the trick effects are fully up to snuff, ha ha! The emotional stakes are genuine, though – you really do root for the Kongs! By all other cinematic or dramaturgical measures, this is a terrible movie, and even I, who saw it on the big screen at a relatively impressionable age, can’t find much to admire! I give King Kong Lives one and a half hillbilly hunters!
Posted by Burl at 23:06