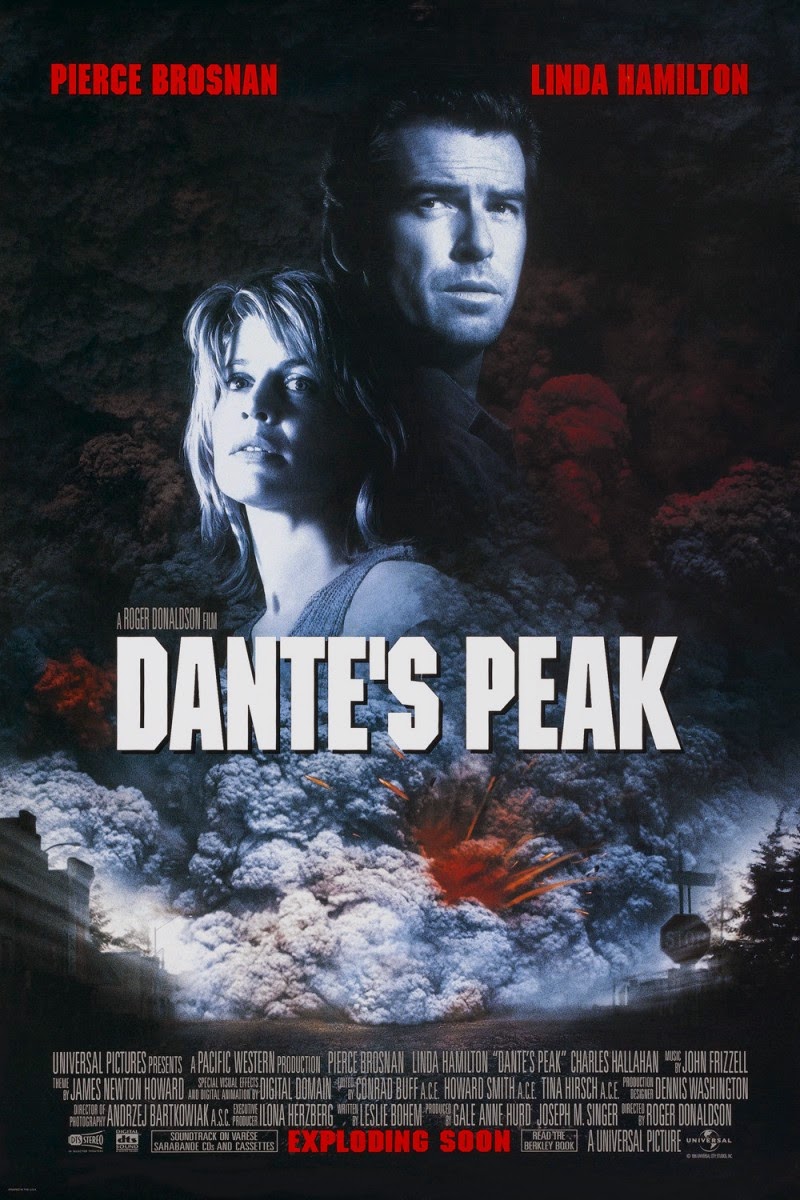 Ha ha and mountain peaks, it’s Burl, back again! I thought I’d take you all the way back to 1997, the Year of the Volcano! Ha ha, that was one of those times when two very similar movies opened within a month or two of one another, and in this case it was volcano movies! This one, Dante’s Peak, opened first, in February, and then Volcano, a movie about a volcano bursting up from beneath the streets of Los Angeles, came along in April! Ha ha, of course I went to see both of them!
Dante’s Peak is the more conventional disastershow of the two, perhaps, but also the simpler and more solid picture! It’s pretty straightforward: essentially a heavily embellished version of that Art Carney picture St. Helens: Killer Volcano! Here we are in the pretty little town of Dante’s Peak, where the camera tilts so often up to the menacing matte painted mountain behind them that you get a sore neck in sympathy! Ha ha! Anyway, it’s of course time for their yearly Mountain Daze or whatever, and an expert shows up to proclaim danger and doom, but fails to convince the ambitious mayor, who is played by an actor called Hamilton! Ha ha, sound familiar? It’s Jaws, but with Linda Hamilton instead of Murray, and a volcano instead of a shark!
Like the shark, the volcano even manages to claim a few early victims, notably the couple skinny-dipping in the hot spring who get boiled like sausages when magma burbles into their pool! Yikes, I’ve thought of that every time I’ve dipped a toe into any geothermal pool ever since! Anyway, there’s volcanologist Pierce “The World’s End” Brosnan, his goofy gang of geological scientists and his rather stuffy boss Charles Hallahan, well known from The Thing! There’s also a crabby grandma! There’s a lot of bickering over whether the mountain will blow or not, and the consensus of everyone but the experts is, don’t worry about it! Enjoy Mountain Daze, ha ha!
When the mountain does blow, there’s a pretty impressive run of both destruction and improbable events! Some of the supporting cast meet their demises: Hallahan is swept into a river with a last little Wilhelm Scream, and granny is dissolved in a lake! At another point, Brosnan's truck drives under water! Ha ha, just because he was at that time playing James Bond shouldn’t mean everything he touches became a spy gadget! There really is a tremendous amount of stale Hollywood cheese in this movie – Like Pompeii, it’s a scrupulous throwback to 1970s disaster movies, missing only the large celebrity cast and soap-opery subplots found in movies like When Time Ran Out (which I admit is a key aspect of them)! But, although Dante’s Peak occasionally matches the sadistic showmanship of those earlier movies, generally speaking when the movie isn’t dumb, it’s derivative, and it frequently manages both simultaneously!
There are some compensations! Peter Jason, whom we know from Streets of Fire and Dreamscape and Brewster’s Millions and Prince of Darkness, appears as a crabby townsman, and he’s an actor I always like to see! The craftsmanship behind the camera is generally fine! And I guess there is a certain pleasure in having these old disaster movie beats trotted out with such punchclock precision!
I remember it fondly for some reason, probably because I vaguely recall the experience of seeing it in the theatre! But I can’t recommend it on general terms, I guess! I’m going to give Dante’s Peak one and a half pyroclastic clouds!
Posted by Burl at 00:23