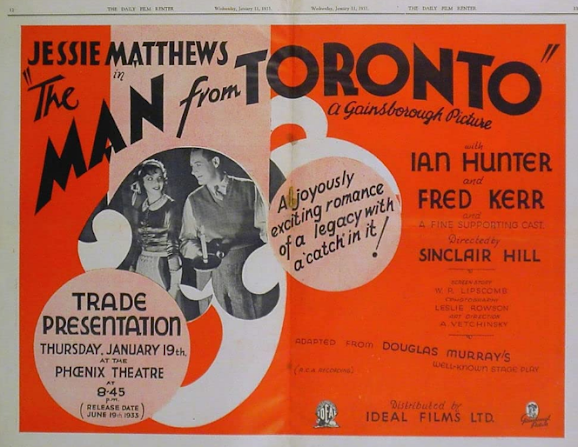 I say and what ho and bosh, it’s Burl! Ha ha, yes, I’m here to review a veddy British picture, which is veddy veddy British, perhaps even veddy veddy veddy British, despite being entitled The Man From Toronto! Indeed, however, the colonies are well represented, as the titular Man is not only Canadian, but is played by South African-born Ian Hunter, whom we know from Strange Cargo!

The Man From Toronto’s real name is Fergus Wimbush, so naturally I found myself thinking of him exclusively as The Man From Toronto instead of by his name! Now, I may have a bit of trouble explaining the situation that kicks everything off, but I’ll try! Ha ha, somewhere in England a young widow, Leila, is left a quarter of a million pounds, but she only gets the money on the condition that she marries a certain Man From Toronto! The Man From Toronto is eligible for the same inheritance, but he must marry Leila, who, incidentally, is played by the cute and charming Jessie Matthews, known for her portrayal of Celia Newbiggin in Midshipmaid Gob!

Neither she nor The Man From Toronto are happy about this weird legacy that requires them each to marry a stranger! Leila complains about it endlessly to Mr. Bunston, her solicitor who is also her uncle, or some such thing, and who is the most I Say What What kind of a fellow you could ever hope to see on a motion picture screen! The Man From Toronto travels from Toronto to England despite his disgruntlement and prepares to install himself in a cottage owned by the redoubtable and proudly homely Mrs. Hubbard! Taking advantage of the fact that The Man From Toronto doesn’t know what she looks like, Leila reinvents herself as a parlour maid called Perkins so that she can observe The Man From Toronto before considering marriage!

So begins a sitcom-style comedy of misunderstanding that stretches well beyond the breaking point, and engulfs both Mr. Bunston and Mrs. Hubbard in the web of deception and confusion! Because he doesn’t want to be cornered into explaining to The Man From Toronto what’s going on or revealing Perkins’s true identity, old Bunston is forced into endless, punishing countryside strolls, perambulations he refers to as “these infernal walks,” and which seem nearly to kill him! Ha ha, he’s chased by cows into a pub, where he discovers he doesn’t hate beer quite so much as he thought he did, nor darts; and then he gets sauced on pints, makes a bunch of new mates, and goes home to slap his pudding! Ha ha!

As Bunston, Frederick Kerr, whom we may recall from Frankenstein, gives a delightful performance filled with well-timed little laughs and “bah’s”, and features a perfect delivery of the line “She’s not a bad looking woman, if you don’t look at her!” And Bunston sure does a lot of phumphering around! Oh, ha ha, he can phumpher all right! I’ve rarely seen such phumphering! If there was an Oscar for phumpering, Frederick Kerr would have won it in a walk! Sadly, however, this was his last role, and afterward he phumphered no longer!

The picture also offers an early role from George Zucco of Dr. Renault’s Secret fame, and a brief cameo from the kind of band that ends all its numbers with “Shave and a Haircut!” It’s delightful and frustrating in equal measure, and crudely made in that early British programmer way, but charming and summery and every bit as villagy as A Canterbury Tale! It shyly approaches the idea of addressing class issues, but aside from shots of “Perkins” looking overworked, it doesn’t much stress the challenges a rich layabout would face doing manual labour all day! Still, it’s a fun little number, and I give The Man From Toronto two old fashioned speedometers, as seen in close up during a crazy car chase scene! Ha ha!