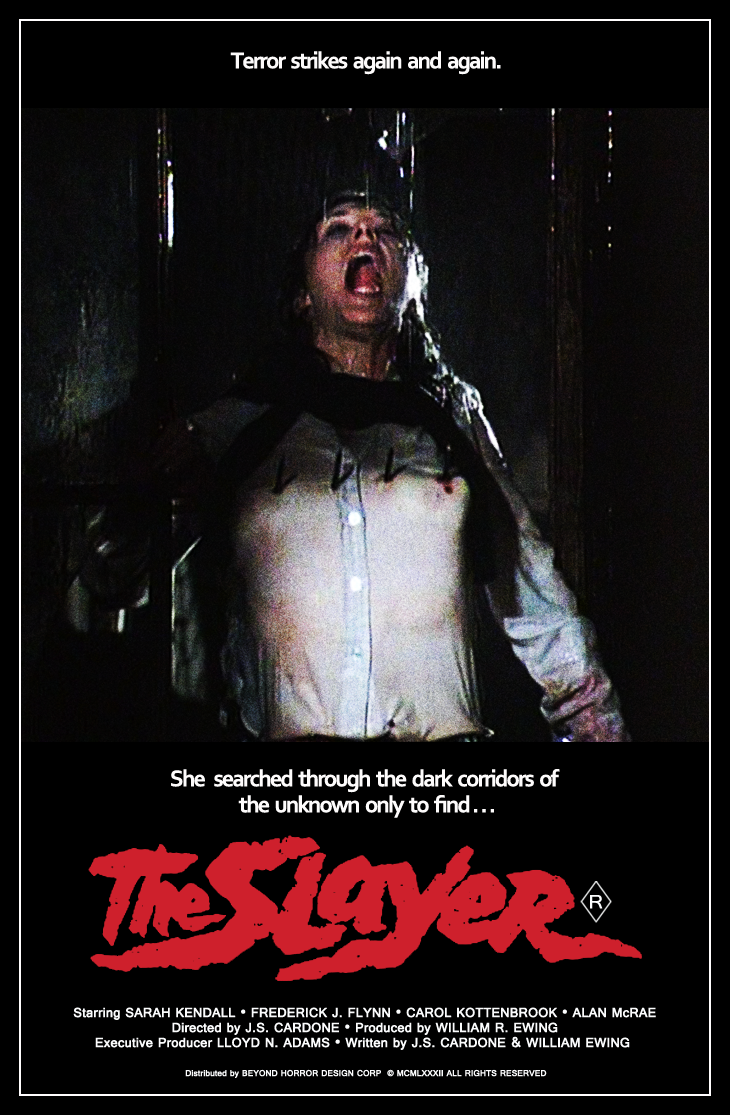 Booga-booga-boo, it’s Burl! Ha ha, you know, there’s something about supernatural slasher movies that I sort of veer towards, despite feeling generally lukewarm on Freddy type things! Stuff like Deadly Blessing and The Outing and even Ghost Dance hit a sweet spot I’d be just as happy if I didn’t have! Ha ha, you know how it is!
The Slayer is a picture some people are really fond of, but me, I’m maybe halfway there! It’s got a thicker atmosphere than most pictures of its type, and some nice location work and better acting, and all of that goes a long mile with a movie like this! But, outside of a couple of squishy gore scenes, there’s not a whole lot else to it, as we shall see!
The picture concerns an artist who’s been having bad dreams her whole life! In them, a skeletal goop creature visits brutal pokings on her friends and family, and even on her pets! She’s woken from one such dream by her husband so that they can go meet her brother and his wife; this quartet will then take a small plane (piloted by Michael “Deadly Prey” Holmes, in the picture’s worst performance) to Georgia’s sandy Tybee Island, where one-by-one they will wander off into the dark and stormy night to become goopy skeleton fodder!
I confess a real soft spot for these East Coastal locations, particularly the ones located south of Chesapeake Bay and north of Florida! The Mutilator, shot somewhat to the north of where The Slayer is set, had a similar half-buried-beach-fence vibe, and that was what I liked best about that picture too! But while The Slayer predates the Freddy pictures with its manifested dream-killer, it doesn’t do much with the concept! Frights are in short supply, but there is certainly no dearth of scenes involving people wandering around calling the names of other people who’ve gone missing!
There are some effective moments of murderin’ though! The trap door scene looks pretty painful, and the rubber head they used for when the good-natured old jasper gets a paddle upside his melon does a quick deflation that provides some real amusement! There’s a mean pitchforking and a hook-dragging as well, and the whole thing ends with one of the farthest-back “the horror is yet to come” temporal resets ever attempted!
It could have used more pep, and a little more of the goopy skeleton, and a little less moping around, but The Slayer, being brief and marginally atmospheric, is still worth a look! I’m going to give it one and a half underused movie theatre locations!
Posted by Burl at 10:51