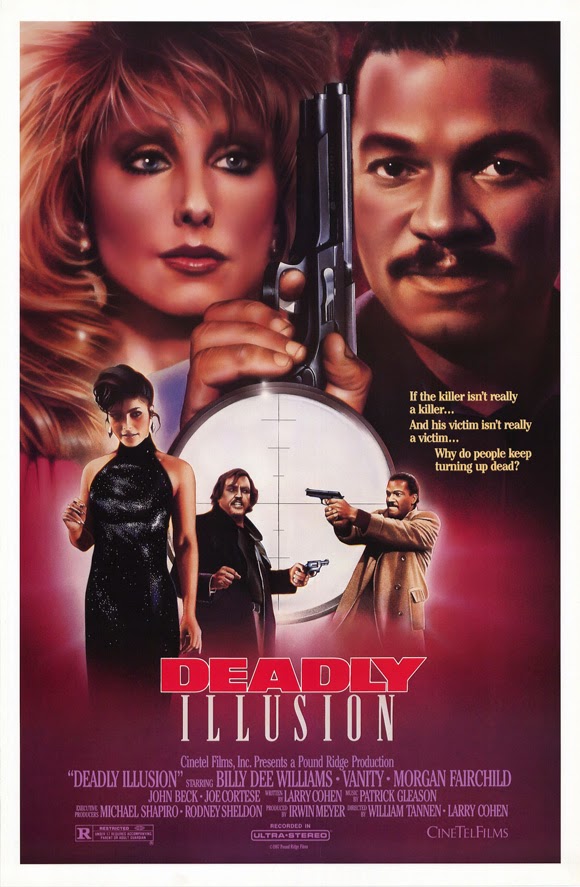 Ha ha, hi, Burl here to review a very calrissian movie! Of course I’m talking about Deadly Illusion, which features everybody’s favourite slickster, a man we know from Fear City and Number One With A Bullet, Billy Dee Williams, playing for us the role of Hamburger! (We never learn his first name, but I assume it’s Mac!)
Hamburger is of course a private gumshoe (and part-time punching bag) in New York City, because this was Larry “A Return to ‘Salem’s Lot” Cohen’s second attempt to make a Mike Hammer movie without getting fired from the picture! Sadly he failed, got canned halfway through, and the rest of the movie was directed by the fellow who did The Hero and the Terror! Yet we mustn’t worry, for there’s still a good deal of that special Cohen mixture of impressive run-and-gun city street action and a dedicated, loony incoherence!
After a scene in a license bureau featuring a crazed Joe “Sorcerer” Spinell, the plot proper is kicked off by a rich guy who asks Hamburger to kill his wife! This anti-uxorian tosses Hamburger a big wad of cash, so the ‘burger says sure! Instead, though, he makes sweet love to her, then declares his earnings “the easiest twenty-five grand I’ve ever made!” Ha ha! But his gal Friday, Vanity, doesn’t like that much, and when the wife turns up dead anyway and it's revealed there was some sort of Chinatown-style imposter situation where Hamburger is concerned, a punch-happy cop, apparently Hamburger’s childhood bully, also becomes involved!
The cop sets a deadline by which Hamburger must solve the case or else become the chief suspect himself; but the deadline, though frequently mentioned (Friday at 10 o’clock, ha ha!), is not the slightest factor in the climactic act of the picture! The actual plot is a bit of a confusion: for a while there seems to be two of everybody, and I was never too clear on what was the goal of these impersonations! Frankly, the picture gets more muddled as it goes along, achieving the narrative confusion found in studio pictures like Blue City! Less clear still was the meaning behind the scene in which Hamburger fights an elevator!
John Beck, Pov himself from Paperback Hero, plays one of the fake guys, or maybe he’s the real version! Another version takes a header out a window, but maybe after all that was Pov! Ha ha, the movie isn’t quite the confusion I’m making it out to be, but it was late when I watched it, and I was sleepy! But even had my wits been totally about me, I’d have had difficulty with the bungled third act! Ha ha, it’s a real dowager empress of a denouement!
Well, who knows why old Larry was canned from the picture, but whatever the case I think it would have turned out much better, or at least weird and confusing in a more interesting way, if he’d been allowed to finish it up! Billy Dee has charm of course, and there are entertaining moments scattered throughout, like the scythe-vs. chair fight or the clever domestic disturbance-based escape, but ultimately it’s a pretty disposable little movie! I’m going to give Deadly Illusion – an apt title, ha ha! – one and a half toppling hot dog carts!
Posted by Burl at 23:44