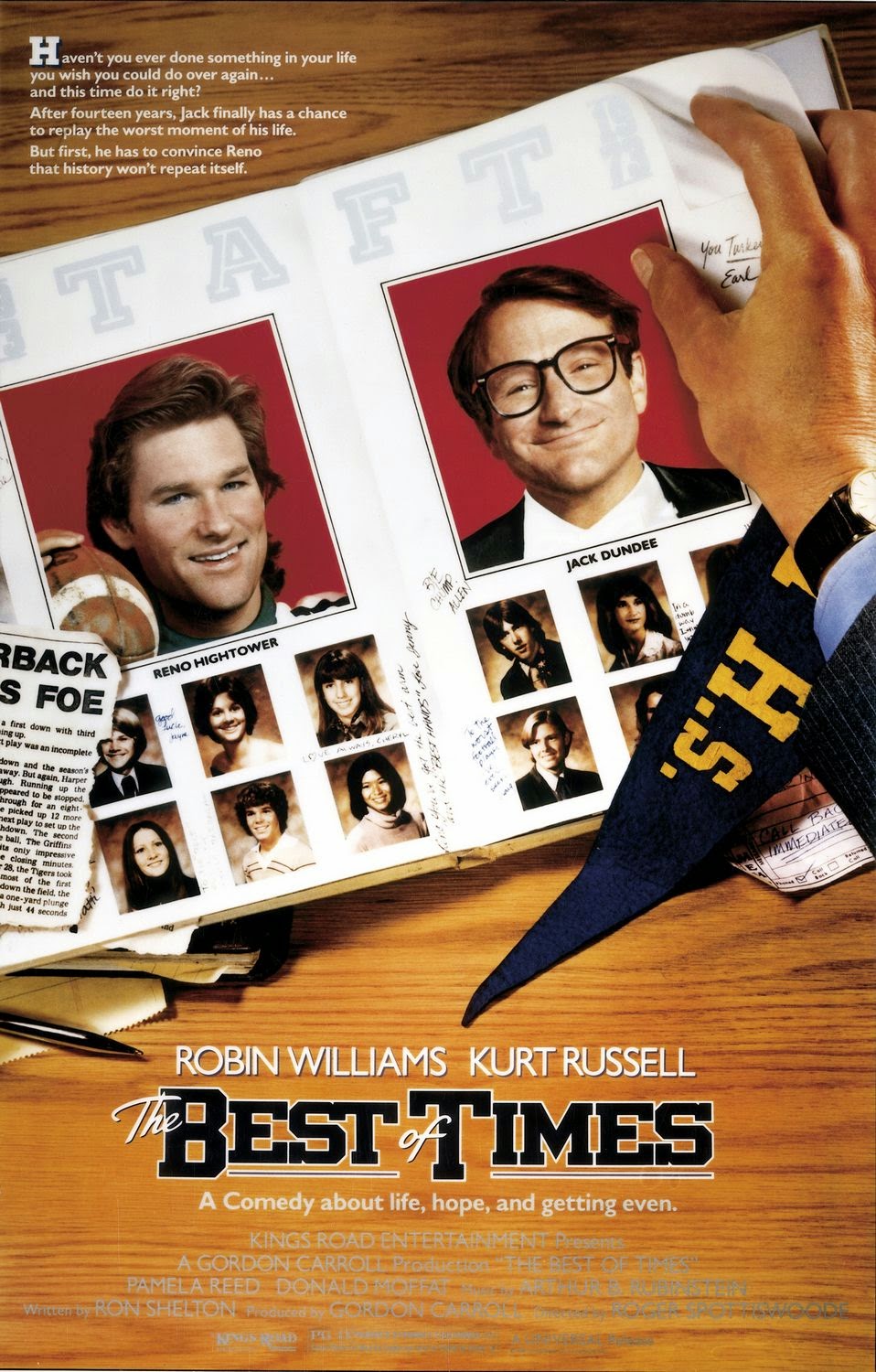 Hut! Hut! It’s good ol’ Burl  here with a review of a forgotten foot-ball picture of days gone by! Now I’m not the best judge of sports movies – generally, I find they’re more formulaic than any slasher picture, and not as interesting! (There are notable exceptions of course, and these include Slap Shot, Caddyshack and Ed, which is about an ape playing baseball!)
Though it is admittedly a pretty cinematic sport, foot-ball scenes, like the sport itself, have never interested me much, and I even find the last scenes of M.A.S.H. a little tedious! Nevertheless it was with a certain strange keenness that I recently watched my VHS tape of The Best of Times, which crosses a foot-ball movie with a mid-80s eccentric-townsfolk comedy!
What was the source of this keenness? I find it difficult to say! Perhaps it was simply that I’d watched the movie years and years before, perhaps when it had been newly-released to home video, yet could remember very little about it! Watching it again would perhaps be a bit like filling in a two-hour blank spot of my youth, for whatever that’s worth! Ha ha!
The picture begins with Robin “Club Paradise” Williams narrating a short history of the town of Taft, California! Taft is apparently the losingest town in history, with its losing streak typified by the canvas-bounce of an immediately-pariahed boxer named Kid Lester; but their most painful and consistent losses are in foot-ball to the larger urban centre of Bakersfield; and the single most egregious of these losses was the one in November of 1972, when Williams’ character Jack Dundee fumbled a great pass thrown him by super-quarterback Reno Hightower! Reno was crippled in the ensuing sack, and the dropped pass, which naturally would have won the game had it had been completed, has been the source of Jack’s obsessive regret and humiliation ever since! Post-game, Taft sank into an even deeper mire of apathy and torpor, and Reno Hightower grew up to look like Kurt “The Mean Season” Russell and become a genial local van painter!
The plot of course it that Jack wants to relive the day of his dreadful abasement, but do it differently this time! And of course that plot meanders along mostly as you think it would, except none but the most cynical of us could have predicted that so much time would be taken up by the men’s conflicts with their wives, and their joint efforts to make reparations! Pamela “Junior” Reed is Mrs. Reno, and Holly Palance from The Omen, much prettier than her dad, plays the role of Mrs. Jack!
She’s kind of a Veronica Lodge type, though not as monstrously self-involved, and her rich daddy, who is also Jack’s employer, is played in fine sadistic form by Garry himself, Donald Moffatt, reuniting with Kurt Russell from when they were in The Thing together! He actually gets more funny bits in the movie than Williams does if you ask me!
So it’s overlong, a bit boring in places and pretty bland to look at – for a foot-ball movie it manages a remarkable lack of atmosphere! It’s also not terribly funny, which is unfortunate! So much emphasis is put on the depression suffered by Taft and her townsfolk that it starts to feel a bit Grapes of Wrath! And I don’t recall The Grapes of Wrath being too terribly uproarious!
However, I do like eccentric-townsfolk pictures; and this one has a dandy cast of oldsters playing the town’s moose-lodge grandees! There are marvelously familiar faces like Dub “Creature From Black Lake” Taylor, R.G. “The Beast Within” Armstrong and M. Emmett Walsh from Fletch! And present-day Kid Lester, who returns incognito to watch the big game, is played by Hugo Stanger, a man who began acting so late in life that even in his earliest roles he was playing “Old Man At Mansion” and “Grandfather!” His elderliness is apparently so striking that in the credits he’s not called Kid Lester, which is his character’s name, but Old Man Lester!
Well, I watched it, and having achieved closure I can now put The Best of Times in the rearview mirror and cruise on ahead into a golden sunset of opportunity! In the meantime, I give The Best of Times one and a half bellowing mooseheads!
Posted by Burl at 23:30