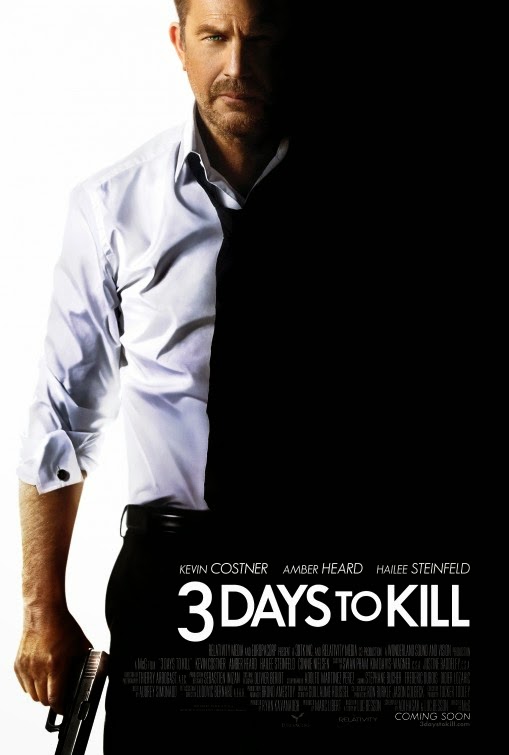 With a huff and a wheeze, it’s Burl, here to review 3 Days to Kill, a GeriAction picture from recent times! I might have said it was “from recent memory,” but I don’t think anyone actually does remember it! Ha ha!
"Ha ha, but McGee whizz Burl,” I hear you saying! “Wasn’t this picture helmed by one of the premiere action specialists of our day?” No, it was not! It was directed by the fellow who made that Terminator picture I never saw! But considering he also made those Charlie’s Angels movies, which I did see, or one of them at least, I was surprised that this picture was fairly bereft of bing-bom-bow! I suppose there must be an established shooting code for this subgenre, earnest and sedate, with possibly In the Line of Fire providing the style book!
Anyway, I saw this on an airplane, and I can tell you that it would be perfect airplane fodder if only it was a bit livelier! (I felt the same disappointment over Jack Reacher, as I recall!) As it stands, its plot, involving a near-elderly CIA agent dying of brainwaste who is pressed into service for One Last Job by a clownish, syringe-proffering dominatrix, but who is coincidentally attempting as a final gesture a rapprochement with his ex-wife and teenage daughter, both promised and delivered two of the things I hate the most in drama: Waiting In Vain For Someone To Show Up, and Dad, You Were Never There For Me! Heavy doses of each are in store for the accidental viewer!
Of course the Parisian setting tips it off as one of those Luc Besson action productions, like Taken 2! Ha ha, I’m sure it’s been mentioned by others, but Besson really seems to have a thing for dysfunctional father-daughter relationships! That compulsion is on naked view here, with Costner literally torturing fathering tips out of a minor-league criminal who happens to be a successful pére des ados! All of this hoo-haa is something about using The Albino to trap The Wolf, or some such crazy nonsense! I have to admit, I tuned that stuff out almost as vigourously as I did the family drama!
Anyway, there’s absolutely nothing to distinguish this movie from a dozen others like it, except perhaps that it’s a bit duller and more repetitive, and more rah-rah American, than most! I’m writing this review now, a week or so after seeing the picture, because I’m already at the outer limit of even remembering the title, much less anything about the picture! Ha ha! Perhaps this seems an unfair review strategy, and I will say in the picture’s defense that I support the making of movies that are neither sequels, remakes, nor adaptations, and as far as I can tell this qualifies!
In closing, I’ve completely forgotten better films than this one; and if I sound very cynical about it, I think I might have caught the sentiment from the movie itself! I almost forgot to mention that it features yet another of my most-disliked tropes: The Ailment Which Kicks In At Critical Moments! It’s right up there with Dying Sadsack, actually! I give 3 Days to Kill one half a cheeseball wobblecam hallucination!
Posted by Burl at 23:15