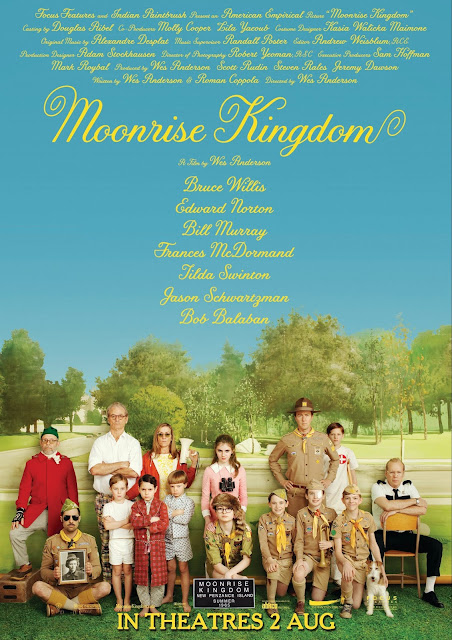 Delighted to be with you today: it’s Burl! Ha ha, I’m here to review a Wes Anderson picture! He’s not a director to everyone’s taste, and even I think he tries a little hard now and again, but in general I find his pictures funny, nice to look at, cleverly constructed and possessed of a wistfulness and melancholy that usually hits ol’ Burl in the sweet spot!
My good pal Evan, who has never steered me wrong, hepped me to Bottle Rocket when it first came out! (Just to give you an idea of Evan’s tactics, he once pulled up beside my car, made the roll-down-the-window motion, tossed me a cassette of Lee Hazlewood’s Cowboy in Sweden, which he knew I’d never heard, and zoomed away!) Then I went to see Rushmore on a first date which proved also to be a last date, and then saw the next two pictures, The Royal Tenenbaums and The Life Aquatic, with a big group of like-minded pals, and we had a terrific time! The Darjeeling Limited was another pleasant cinematic experience, and quite a romantic one! But then I missed the next couple of pictures, and have only just now caught up with Moonrise Kingdom! (The Fantastic Mr. Fox I’m saving for when my little child is old enough to appreciate it, and then we’ll watch it together!)
So how does Moonrise Kingdom stack up in ol’ Burl’s opinion? Well, it’s decidedly a minor work, I suppose, ha ha, but a lovely one in many ways! It takes place on a little made-up Atlantic Coast island, which in the grand tradition of made-up islands seems to have a lot more space on it than would be geographically possible based on the frequent map shots! It hardly matters of course, when telling the tale of two love-struck, prematurely damaged pre-teens who fall in love circa 1965 and hie off together to camp in the woods! Boyscout Sam is an orphan, is disliked by the rest of his Edward Norton-led troop, and is an excellent woodsman; kohl-eyed Suzy is the dour, binocular-obsessed daughter of Bill “Ghostbusters” Murray and Frances “Fargo” McDormand!
The two missing kids stir the island into a real hubbub, with local cop Bruce “Die Hard” Willis mounting his own special type of investigation! In the meantime his secret love affair with McDormand winds to a bittersweet conclusion! Occasionally a naturalist/historian/narrator played by the underused (in this movie and, I believe, in general) Bob “Altered States” Balaban pops up to provide information on an approaching storm! Other stars who show their faces include Tilda Swinton, playing Social Services, Jason Schwartzman as Cousin Ben, and Harvey “Mean Streets” Keitel as The Commander! It all comes to a climax as the storm hits its zenith, and I can’t report that it ends unhappily! Ha ha!
For some reason this picture was not shot in the 2.35:1 aspect ratio Anderson favours – it’s especially strange because this is an out-of-doors picture and the widescreen format would have suited it well! Nevertheless it looks lovely (except for the cheap and lousy visual effects), and delivers the expected funny and touching moments! Its themes swim lazily below the surface: loneliness, otherness, the evasion of the inevitable! The island setting clearly symbolizes obviousness, but that’s okay! I liked the picture, and its little takedowns of quasi-militaristic scouting tropes, best represented when an angry Keitel tells Norton “I’m fieldstripping you of your command!” Ha ha! I give Moonrise Kingdom three fieldstrippings!
Posted by Burl at 21:56