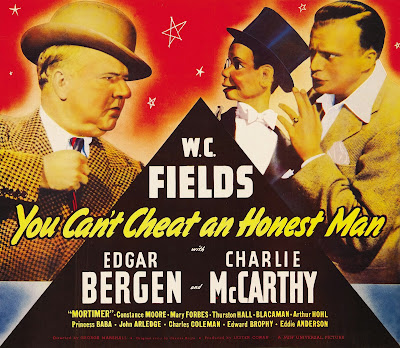 Hello all you chumps! Ha ha, I don’t really mean to call you chumps – I’m just channeling the spirit of W.C. Fields! Because it occurred to me recently that there’s a big gap in my classic comedy watching experience – a big gap shaped just like Fields! Aside from It’s A Gift, I’ve only ever seen bits and pieces of his movies and routines! And so it was that I decided it would be good to watch one of his later pictures, You Can’t Cheat an Honest Man!
Fields had a pretend feud going with famed radio ventriloquist Edgar Bergen, and more particularly with Bergen’s little pal Charlie McCarthy! This movie was largely a framework within which to carry that feud over to the motion picture medium, and apparently it paid solid dividends at the box office! Though, ha ha, the word is that Fields disliked making the picture, and didn’t get along with credited director George Marshall!
Here, Fields is Larson E. Whipsnade, a circus owner in debt up to his lampshade! He’s in constant conflict with two of his star attractions, Edgar Bergen and Charlie McCarthy! Ha ha, some of the Bergen-McCarthy scenes, especially a sequence in which Fields feeds the little dummy to the alligators, give off a distinct Dead of Night vibe, as we are shown in no uncertain terms that Charlie is alive, sentient and capable of independent locomotion! It’s pretty creepy, especially if you’ve seen as many living-dummy movies as ol’ Burl has, ha ha!
To the extent that the movie provides a plot, it’s that Larson’s daughter, who worries about her father’s financial well-being (as well she should, ha ha!), falls in love with Edgar Bergen, and by extension Charlie McCarthy too, I suppose, but agrees to marry the rich dewberry Roger Bel-Goode instead! But then Larson arrives at the Bel-Goode mansion in a chariot, terrifies the lady of the house with all his talk of snakes, and then engages in a downright hilarious ping-pong game with a Frenchman! The money problems are not resolved, but Larson and his daughter are chased out of the house for a reuniting (grudging on Larson’s part) with Bergen and his hated manikin!
It’s true that this picture has a stodgy vaudevillian feel to it, with skits instead of scenes and probably too much Bergen and McCarthy! But I’m not overly familiar with the famed duo’s routines, so I didn’t mind that! Fields is funnier though, and I wished there was more of him! I chuckled quite a bit, especially when Bel-Goodie père calls Larson a pharisee, a pecksniff and an egregious tartuffle! Ha ha, Roger is then told by the tomato-nosed con man that “if there is such a thing as a tartuffle, you sir are just that thing!”
It’s not considered on of W. C. Fields’s greatest works I suppose, but I thought it was a pretty funny picture, and I’m going to give You Can’t Cheat An Honest Man two and a half ca-nables!
Posted by Burl at 13:25