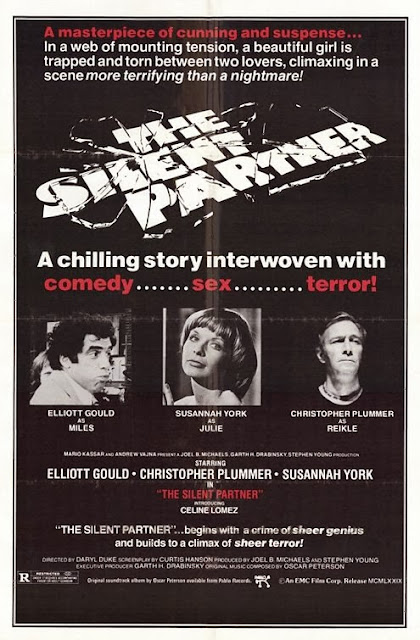 Ha ha, it’s Burl, please give me all the money! No, just kidding, I’m not here to rob you! I’m here to review one of my own Yuletide standards, the great Canadian thriller The Silent Partner!
Yes, where some people have Die Hard or Cobra, my own favourite non-Christmasy Christmas picture is this jolly tale! But many people forget – I myself had forgotten before re-watching the movie, in fact – that it’s only a Christmas picture for the first half, after which it switches to a summery milieu! Nevertheless, the images of a cold-eyed Christopher “Dreamscape” Plummer in a Santa suit are what linger from the movie, so file it under Xmas, say I! Ha ha!
The plot unfolds like the chess game so frequently and unsubtly referred to through the picture! Miles Cullen, played by Elliot Gould from M*A*S*H and S*P*Y*S and W*H*I*F*F*S, is a milquetoast bank teller in Toronto’s then-new Eaton Centre mall! It’s nearly Christmas, and the observant Miles notices clues which lead him to believe one of the many mall Santas is going to mount a bank heist! So he prepares by setting aside most of the money for himself, and Plummer, the bad Santa, gets away with only a small amount!
Well, this does not sit well with Santa, and he sets about trying to von Trapp the teller into giving him the money! Back and forth goes the see-saw, and soon Miles has cleverly led the police to Santa’s very workshop itself! This is where the time jump occurs, with Miles sitting on his money – which he keeps in a safe deposit box at the curiously low-security bank – while Santa sits in the cooler!
Of course the battle continues once Santa is released, and then we have more threats, some shouting, a gruesome fishtank murder and a scene in which John Candy, years before he was Armed & Dangerous, gets married to a vacuum-headed blonde! Finally Santa, who has reinvented himself as a woman, makes another assault on the bank, and Johnny Smith’s dad from The Dead Zone gives him serious what-for!
Anyone who is curious about what Canadian money looks like should watch this picture! They’ll find not just many scenes of Gould counting out bills, but attractive photography from Billy “Billion Dollar Brain” Williams and solid suspense direction from Daryl Duke, who’d made Payday a couple of years earlier! Little remarked upon, other than for its existence, is the score by jazz great Oscar Peterson! Ha ha, it turns out that Peterson was not just a great pianist and composer, but a dab hand at suspense music as well!

Here is a fine genre exercise, dated in only the best ways! (Candy, for example, is quite svelte!) There could stand to be a little less of the relationship between Gould and banking colleague Susannah York, but it pays off in the end, and makes the picture richer! The young and lovely Francophone who makes sweet love to Gould later in the picture is not the greatest performer ever, but she does okay! In sum, this is a movie worth your while, especially at this time of year! I give The Silent Partner three deceased angelfish! 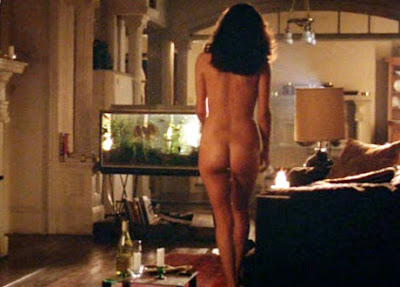