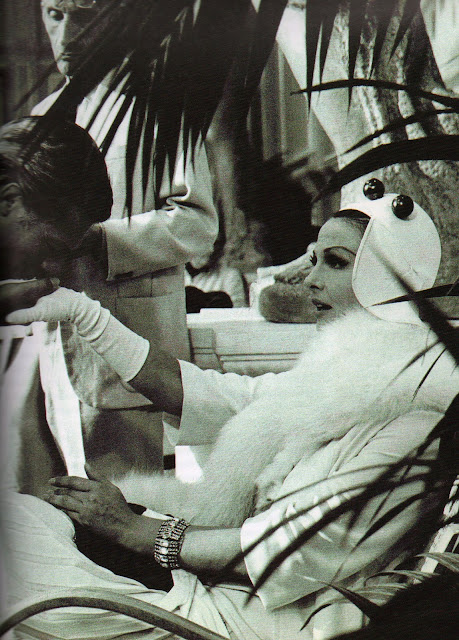 Ciao, ho ho, is Burl! Yes, I’ve seen a lot of classic movies in my day, but one that always eluded my gaze was Fellini’s 8½! I don’t know why, because it’s right up my street, but I guess everybody has some gap somewhere in their film education! There are people, as I understand it, who still have never seen John Frankenheimer’s Prophecy, for example! Ha ha!
I’ve seen plenty of Fellini pictures of course, including once a marvelous 35mm cinema screening of Casanova! But this picture has to be one of his best! Most of you will know the story: Marcello Mastroianni plays a famous film director named Guido who is preparing a new picture! However, he doesn’t really know what it’s going to be about, and the project is falling apart around him even as his life, particularly his rom*ntic life, is falling apart too! Try as he might to direct all the ladies in his life, their previous tractability has waned along with Guido’s powers of influence!
The story is built from dreams, flashbacks, real life and scenes in which real life collides with movie scenes and probably dreams, fantasies and flashbacks as well! The brilliant staging and beautiful black and white photography keep it all looking good and moving swiftly, and the overall impression is of kaleidoscopic chaos, a groovy disintegration, a headlong loss of control arrested only when the director finally gives up on conventional attempts to regain command and instead marshals his powers of filmmaking!
Ha ha, Guido can really be a not-so-nice guy, but he’s still sympathetic and makes for a grand hero! The flashbacks explain a lot, and in particular a great sequence involving a hefty dancer named Saragina! Nino Rota’s score really works here, and the beachside rhumba is altogether a beautiful piece of filmmaking! All the ladies are very impressive, and I was gladdened to see Barbara Steele, famed from her appearances in Shivers and Piranha, show up as a raven-haired non-Italian!
Most of the last part of the picture takes place around a huge half-built structure that is supposed to be a spaceship set for Guido’s movie! But soon every single person in his life shows up there, and of course there’s a clown parade as well! Ha ha, there has to be a clown parade! It must have been difficult to schedule these scenes – usually in a movie with a large cast, you don’t have everybody in there at once! Those would have been some pretty long call sheets, ha ha!
Well, this is a picture that lived up to my long-germinating expectations of it! It may well be the Fellini picture I like the best (that I’ve seen, haven’t seen them all yet!), and that’s saying something! It’s a True Tale of Filmmaking, and a funny and enjoyable picture! I give 8½ three ½ clown parades and an extra half of a pair of sunglasses!
Posted by Burl at 19:10