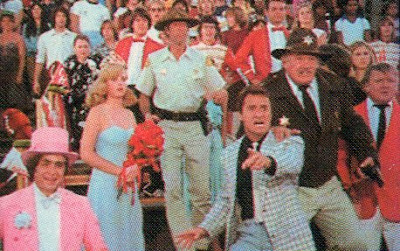 Vrooom vroom, it’s Burl with another dusty car chase picture for you! This one, Smokey Bites the Dust, is firmly in the tradition of Roger Corman chase movies one usually associates with Ron Howard, movies like Eat My Dust and Grand Theft Auto! (At one time, I must confess, Grand Theft Auto was my favourite movie ever, and I still regard it as Ron Howard’s finest achievement!)
But there’s no Howard to be found in this one, not even a Clint or a Rance, and the role of Hard Driving Doofus instead goes to Jimmy MacNichol, Kristy’s brother, well-known from his appearance in the daffy Night Warning! It was directed by Chuck Griffith, who wrote many of Roger Corman’s finest scripts, including the incomparable A Bucket of Blood! He was a man who never heard a funny name, goofy musical cue or “boi-i-i-ing” sound effect he didn’t like, and all of these are present and accounted for in Smokey Bites the Dust!
Jimmy plays a vehicularly proficient high school goofabout who’s in love with the prom queen! She might have been the valedictorian too, I’m not sure, but in any case she’s slated to give a speech to the graduating class in a foot-ball field! However, young Jimmy effects a friendly kidnapping, and soon the chase is on!
Immediately there’s a large crowd hot on their tail! The sheriff, who of course is the prom queen’s father and hopping mad, is after them, along with a diverse bunch that includes the fantastic Dick "Piranha" Miller, a nutty sheik played by Mel Welles, and a demented football player in the grip of religious mania, played by none other than a young William Forsythe! These guys are pretty steamed at Jimmy all right! The sheriff plans to electrocute him with his own bare hands upon capture, and the foot-ball player abashes himself before God to request the power of instantaneous decapitation of his enemy, Jimmy!
The prom queen, meanwhile, seems not to mind having been kidnapped, and enjoys the car chase she’s in a lot more than Kay Lenz did in Moving Violation! And speaking of Moving Violation, a strange thing happened to me when I watched Smokey Bites the Dust recently! I’d never seen it before, but the car crashes were strangely familiar! It was a stronger feeling than simple déjà vu, and for a few minutes I thought I was going crazy, ha ha, before I realized that in the classic Corman tradition, Griffith had simply taken the crash footage from Moving Violation, and probably from some other movies too, and spliced it in to his opus! But it’s done pretty well, and if I hadn’t just watched Moving Violation a few days earlier, I might never have noticed!
But the tone of the movie is different, of course! The chases are frequently set to loony clown music, and as the film progresses, a strange pumpkin motif becomes evident! Of course any small structure or wooden construction of any kind we see on screen is earmarked for crash-through! Dick Miller comes to the same end he did in Moving Violation, careening down a hill and busting through a series of outhouses!
Smokey Bites the Dust is not a great movie, though it’s good-natured! I wish it was funnier, and Jimmy is kind of irritating, and I have to confess that though I’m usually a fan of recycling, in this case the high percentage of recycled footage was kind of disappointing! I know it was a budgetary issue, but it seemed a bit lazy, and anyway wouldn’t the fun of making this sort of picture be in staging your own crash scenes? Oh well, maybe Griffith didn’t have a choice in the matter! I give Smokey Bites the Dust one and a half snakes crossing the road, mostly for its bold use of Dick Miller!
Posted by Burl at 21:03