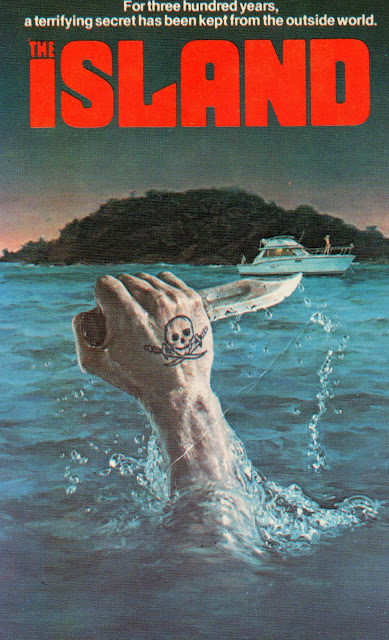 Hi friends! Yes, it’s Burl again! Ha ha, I have had occasion already to review a movie adaptation of one of Peter Benchley’s literary efforts – Jaws in that case, as you may recall – and now here I am, barely a month later, trying the same trick again! This time the movie in question is The Island, which, after Jaws and The Deep, represented Benchley’s first tentative steps out of the ocean and onto dry land, like one of our Galapagosian antecedents of millennia gone by! But he takes care to keep the comforts of saltwater within easy reach!
The movie is less looney-tunes than the book, but not by much! It seems that Michael Caine, the Billion Dollar Brain, playing the sort of adventuresome magazine writer encountered only in the pulpiest fiction, has decided to investigate the Bermuda Triangle, a very late-70s thing to do, and because he has to, is taking his twelve year-old son along for the adventure! Ha ha, and an adventure it soon proves to be, as, after a quick stop at a gun shop operated by Don Calfa or someone a lot like Don Calfa, the pair are involved in a plane crash, an interrogation by Zakes Mokae (whom we remember from The Serpent and the Rainbow), a successful barracuda fishing trip and, finally, assault and kidnapping by pirates!
Yes, it’s pirates at the bottom of everything! There are some scenes sprinkled throughout of the pirates doing their thing on hapless boating parties, and they chop heads and cut throats with Voorhees-like abandon! This may have seemed crazily anachronistic back in 1980, but today of course we know there are many pirates out there who strike at yachts whenever they get a chance! Anyway, pirate leader David Warner takes a filial liking to Caine’s son and decides to induct him as an heir to the pirate throne; in the meantime Caine is given over for stud duty to a comely she-buccaneer! His first escape attempt is foiled by jellyfish, but eventually, after the pirates have taken over a Coast Guard ship, he manages to catch them unawares and machine gun the lot of them! Almost all of them anyway – it takes a flare gun to get rid of David Warner!
This is certainly a cracked concoction, and despite its provenance and arresting poster imagery, it flopped miserably when it was released to an unsuspecting public on June 13, 1980! Ha ha, they all went to see the slightly less gory Friday the 13th instead, I guess! One of the oddest things about this movie is the director: it’s Michael Ritchie, known to us for his comedy work in pictures like The Bad News Bears and Fletch! The movie was shot by the great Henri Decaë, but it shows little of the artistry he displayed in his many French New Wave efforts! But there is a nice score from Ennio Morricone, who, just as he’d done with Orca and other such movies, proves that he’s perfectly happy contributing good work to a goofy project!
But it’s got a pretty good cast – I always like Michael Caine, ha ha! – and some nice tropical locations, and the scenes of pirate attack do generate a healthy frisson! Ha ha, I liked when they attacked the schooner full of cocaine-smuggling hippies! The movie gets worse rather than better when Caine and his son get to the pirate island though, which demonstrates a pretty fundamental failing somewhere along the way! I’m going to give this goofnugget one and a half tight-shorted karate guys!
Posted by Burl at 16:36