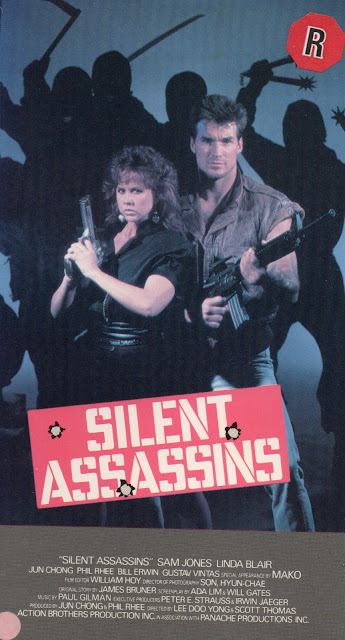 Hi-i-i-i-ya, it’s Burl! Yes, I’m here to review a movie that has lots of the martial arts in it, the inaptly named Silent Assassins! Ha ha, have you seen this one? I’m excited to review it, because it feels like a new discovery: a healthy slice of Ridiculous Action that I discovered more or less on my own!
If you recall, Ridiculous Action is the (admittedly unimaginative) name I’ve given to that special microgenre of thrillers that are so gloriously, crazily over the top or just plain puzzling in their attempts to be action-packed that they cause you to guffaw and reach for another handful of chips at regular intervals! And though Silent Assassins doesn’t quite reach the giddy heights of Raw Force or Deadly Prey, it still does pretty well for itself!
It’s ostensibly a ninja picture, like so many Ridiculous Action movies are, and strangely, though I always enjoy Ridiculous Action, I’ve never much cared for the ninja genre! They’re so often repetitive in their action and unimaginative in their execution! But this one dilutes the whole ninja thing by having all sorts of other interesting stuff in it, and the ninjas themselves wear thick balaclavas and big coats rather than the usual tight ninja gear, so it’s got that going for it as well!
The star of the picture is Sam J. Jones, the guy who theoretically could have had a huge career after Flash Gordon if only they hadn’t dubbed over his voice! I’m assuming they’re using his real voice in this one, and there’s nothing particularly wrong with it, so I wonder why they dubbed it for the pulp space adventure! Who knows? Anyway, here Sam plays Sam Kettle, a cop whose methods are unorthodox, but are tolerated by his chief because after all, he’s The Best There Is! The whole movie is set in some pan-Asiatic netherworld, and a bald bad guy named Kendrick, with a heavy but unplaceable accent and a hysterical screechy voice, engineers the kidnapping of a elderly scientist and a little girl!
Why? Well, for The Formula, of course! The scientist is played by the old guy you hire when Wilford Brimley is busy, and Kendrick goes to work on him with bamboo splinters in a pretty horrific scene of torture! But even this harsh treatment isn’t enough to make the brave old duck give up The Formula! In the meantime Sam Kettle has been called onto the case over the objections of his goodly wife Linda Blair! Ha ha! He’s joined by the little girl’s uncle and red-trousered swordsman, and together they take on Kendrick and his legions of heavy-coated, hand-chopping ninjas!
Ha ha, the ridiculousness is strong in this one! Kendrick himself is completely nutso, with his high, shrieky delivery of such lines as “Take that, Dr. Wise Guy!” He pulls the old rubber baby trick on Sam Kettle early in the picture, laughs like a gooney bird whenever he runs, and does a lot of nefarious tortures; but after all that his quick demise in an exploding toy helicopter is a little disappointing! Mako shows up, of course, fresh from Armed Response, and has a few good battles with the ninjas before they pull a bookshelf over on him! Linda Blair showed she could kick buttocks in movies like Savage Streets and Nightforce, but here she’s nothing more than a concerned wife! She gets to shoot a guy at one point, but it’s still pretty disappointing that she’s not more involved in the action! Well, Sam Kettle’s two pals, one of whom reminded me very strongly of Eddie from Big Trouble in Little China, help take up the slack!
Posted by Burl at 10:20