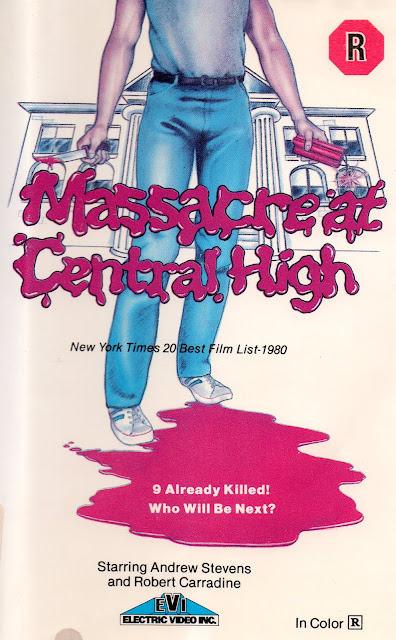 Hi, it’s Burl, here to take you back to high school! I’m sure that was the most delightful time of your life, and if you watch a picture like Massacre at Central High, you’ll find all those sweet memories coming back to you in an intoxicating rush!
Of course it sounds like a regular slasher picture, and then when you see the production year, 1976, you figure “Ha ha, I guess it’s more one of those proto-slashers, like Class Reunion Massacre or Savage Weekend!” But then you watch the movie, and for the first half or so, you could certainly be forgiven for assuming you’d accidentally put on one of those Crown International drama movies, like Malibu High or The Teacher! The presence of Robert Carradine and Rainbeaux Smith in the cast only bolsters this impression!
But finally the promised massacre begins! I’ll give you a quick rundown of the plot: the kids of Central High are routinely terrorized by a gang of blond BMOC bullies, of whom Mark, played by Andrew Stevens of The Fury, is the kindest! The rest of them are a pretty mean bunch! Then Mark’s old friend David, a sensitive fellow and an independent thinker, arrives at the school, but soon sees this bunch of goons for the ruffians they are! He resists Mark's attempts to pull him into the gang and ends up allying himself with their tormentees, who include Carradine’s mystical hippie, an outstanding glasses nerd, a chubbins, and some pretty girls! Eventually the bullies get tired of David’s stubborn resistance to their overtures and drop a car on his legs!
Well that gets David pretty steamed! The next thing you know, the bullies are dropping like flies – literally in the case of the one who meets his end thanks to a rigged hang glider! Another is tricked into diving into an empty swimming pool, and several others are blown up! The former victims almost immediately start filling the void in the social strata left by the murdered bullies, becoming swaggering cretins themselves, so David must get rid of them too! Ha ha, that’s a little social commentary for you, a feature of this picture duly noted by every single review of it ever!
So yes, it’s got more going on in its head than your typical teenage picture! It’s interesting too that, as in Peanuts, there are never any teachers, parents, police or adults of any kind visible in the movie! It would have been cool if they’d stayed off-screen but still occasionally spoke, and we heard “Waa-waa-wa-wa-wa-waaaa,” like in the Peanuts animated specials, but the filmmakers didn’t take this approach! Perhaps they feared being chewed up like a kite in a tree by the ruthless Schultz legal machine!
It’s an enjoyable picture with strong acting and an atmosphere all its own, though at times it strongly reminded me of Christine, of all movies! The patient, open-minded slasher fan will find it a charming sideways addition to the genre, however, and 1970s teen picture admirers, in particular those who love a good Crown International release, ought to have a look as well! It gets a bit mired in its depictions of high school polity, and it’s a chatty picture, no doubt about that, but it’s still a special, one-of-a-kind photoplay, and for that reason I give it two and a half exploding lockers!
Posted by Burl at 14:14