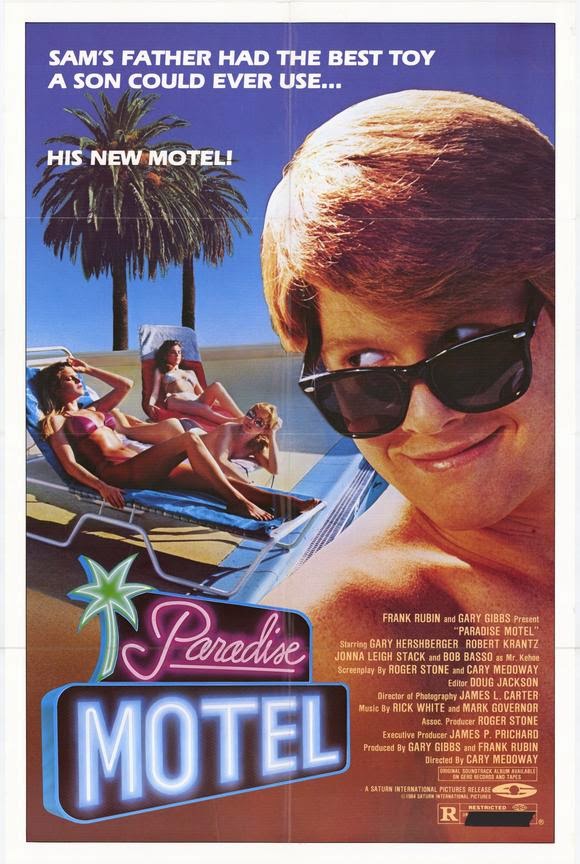 Hi, it’s Burl here, checking into the Paradise Motel! Ha ha, what? Well, that’s the name of both the movie I’m reviewing for you today and the motel in which much of the action takes place!
Some people might confuse this production with Pink Motel, but don’t be fooled! This is the one which features tall ginger Gary “Free Ride” Hershberger as Sam, the fellow whose dad owns the motel! And I’ll tell you something about Gary Hershberger – they say he and Jason Lively once went into a room together, and only one of them came out but nobody knows which one of them it was! Ha ha! And still to this day they don’t know!
Anyway, Sam is the lonely new kid in school, because his parents just bought the motel! He meets the local Good Time Charlie, a slickster by the name of Mick, who is from the start what I would call a real gambelpooty! But he becomes more interested in Sam when he learns about the motel and the unoccupied honeymoon suite; and very quickly poor Sam is begged, bribed and practically bushwhacked into a situation not unlike Jack Lemmon’s in The Apartment, with Mick as an even slimier Fred MacMurray!
Sam has romantic yearnings of his own, for the lovely Laura in particular, but for the nonce must settle for lying in his bed and listening to Mick and his buddies score with their various girlfriends! Ha ha! He also must suffer the humiliation of driving around in a Peptol-Bismol pink station wagon with a reclining hula dancer effigy on top! Needless to say, Sam is pretty downcast most of the time, though he has faked-up fun with his false bros now and again! Ha ha!
Things come to a low-key climax after he comes to realize the sort of fellow Mick really is – not Styles from Teen Wolf, not even Damone from Fast Times at Ridgemont High, but a real and irredeemable slimeball! So Sam bops him on the nose and then a misunderstanding involving the tough coach unravels on Mick, and finally Laura, foolishly smitten with Mick, sees the light too and turns towards Sam!
So it’s your basic misunderstanding-based teen comedy, though the central confusion – that is, the fact that Laura is Mick’s girlfriend – is absurdly thin and unlikely, based as it in on the habit of both Mick and Laura happening to never say each other’s names when they’re with Sam, and nobody else in the school happening to mention their relationship over a period of months!
Other than that, it’s not a bad picture as these things go! Hershberger is an affable presence and an okay actor, and the guy who plays Mick is perfectly cast! And there’s a perpetually horny kid, of the sort memorably played by Billy “Hospital Massacre” Jacoby in Just One of the Guys, here competently essayed by Jeffrey Jay “Secret Admirer” Cohen! Ha ha, he gets himself and Sam in trouble due to some cockamamie theory or other!
Because it’s got a general competence reminiscent of The Malibu Bikini Shop, and a couple of weird bits (always a plus, ha ha!) and some okay performances, like from Sam’s dad and from Sam himself, and because it doesn’t try too hard, to the point where I’m not certain it tries at all, I’m going to award Paradise Motel two bikini adjustments!
Posted by Burl at 13:23