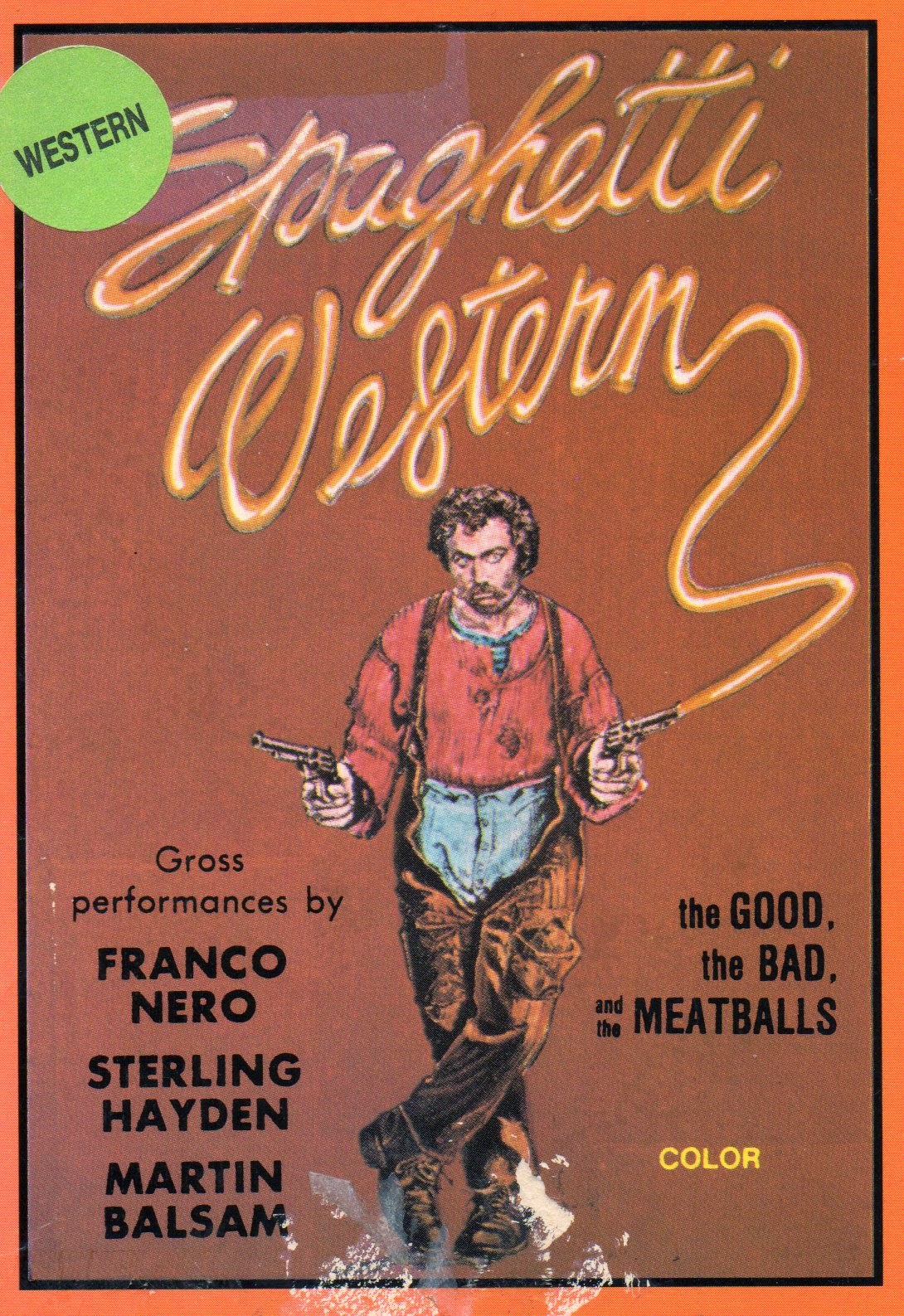 Rrrrrr-a-t-a-t-a, it’s Burl! And you know, I’ve got another movie review for you, ha ha! This is a review of, yes, a spaghetti western, but it’s a spaghetti western by the name of Spaghetti Western! It’s also known as Cry Onion I believe, perhaps better known as that in fact, and I seem to recall the video box with that title from a long time ago! I never knew what the heck it was, though!
Ha ha, I sure know now! It’s a crazy movie starring none other than Franco Nero, well known for his appearances in The Visitor, Die Hard 2 and Django Unchained, and also from some Italian movies! Here he plays Onion, an onion-eating ex-gunfighter turned sodbuster with a wavering Jimmy Stewart voice who travels in a cart full of onions pulled by a horse wearing a straw hat! He plans on being an onion farmer and arrives in Paradise City ready to take up that noble profession!
But sad to say that Superoil, a petroleum concern headed by Mr. Lamb (Martin “Psycho” Balsam sporting a fake Robert Mitchum voice and a mechanical hand, which I suppose you’d call a touch of steampunk if you were that way inclined) has overrun the area with badmen who’ve bullied and killed the land out from under the farmers and citizens! Onion quickly becomes Mr. Lamb’s bête noir, and the next thing you know he’s battling dozens of henchmen at a time, beaning them with onions, spraying onion spooge in their eyes and razzle-dazzling them Pixie and Dixie style with onion-juggling tricks! Ha ha! He also knocks people out with his murderous onion breath and has trained his horse to bedevil enemies with face-melting bumfarts!
Onion allies himself with Pulitzer, a newspaperman played by Sterling “The Long Goodbye” Hayden, and his lovely daughter, whom he falls in love with on sight, complete with animated hearts! There are also a couple of kids who help him out, and the older of them has been dubbed with an adult’s voice while the younger remains mute – but he speaks at the end in the voice of an elderly Jewish cantor! And then there’s a horse-bike chase; three rats wearing tribute hats (a Chaplin bowler, a Keaton porkpie and, I think, Harry Langdon’s straw boater); lots of crazy slapstick; a dirtbike gang in football attire, or at least an Italian simulacrum of same; and of course onions, onions, always onions!
In the end, after a final fight in which Mr. Lamb is defeated despite the magical extension-punches of his golden hand, Onion puts the deposed oilman to work harvesting onions! Ha ha, it’s the most fitting punishment! And I’ll tell you, it was great to see a movie with such a scornful attitude toward oil and oil companies! It was like Thunder Bay turned inside-out! The oil company is evil, full stop, and once the people have chased them away, they blow up the forced-perspective oil derricks, plug up the wells and go back to raising crops! Ha ha, very satisfying!
This is a crazy picture, and pretty funny in many parts! It’s got lots of dumb parts, don’t get me wrong – it often seems made up mostly of dumb parts actually! But it’s so weird, and the dubbing particularly is so crazy, that I enjoyed it! Just make sure you see the dubbed version, ha ha! Anyway, I give Spaghetti Western three very special Dick Butkus cameos!
Posted by Burl at 15:25