Burl reviews How To Get Ahead in Advertising! (1989) 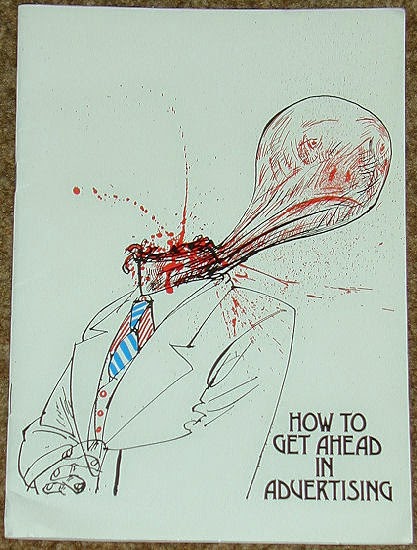 What ho, it’s Burl! Ha ha, I’m here to tell you about Bruce Robinson’s second picture, How To Get Ahead in Advertising! His first movie, Withnail & I, is one of my very favourites, and so I was excited to see this one back when it first came out!
I can’t remember what I thought of it back then, though the fact that I never watched it again, at least not until the other day, makes me suspect I didn’t hold it in quite as high esteem as Withnail! But at the same time, I certainly can’t recall disliking it! I guess it was just a small potato, medium done!
Well, I watched it again, and I can confidently state right off the top that it still doesn’t hold a candle to Withnail & I, but then again what film could? The return of Richard E. Grant as another hyper-verbal, spleen-venting tirade machine suggests Robinson was actively looking to make something comparable to his debut, but here, instead of drawing from his real life, as he had for Withnail, he drew from his personal set of concerns, and he sets them out almost as a series of lectures delivered by Grant’s ad man character, Dennis Bagley!
The rants Bagley expectorates, on the theme of the horribleness of modern life, particularly as it relates to advertising and the acceptance of same by the populace, are funny, acerbic of course, and not unpersuasive (though I was in agreement with the general drift beforehand, ha ha), but are also pretty on the nose! They’re more or less what you would expect from a movie whose title is a pretty base pun!
And why is the title a pun, you ask? Well, ha ha, it’s because Bagley, under terrible professional stress from his inability to craft the right campaign for a new pimple cream, develops a huge boil on his neck which ultimately grows a face, a moustache and a Daily Mail-reading personality! Ha ha, it grows and grows, gives a few speeches of its own, drives the already unstable-seeming Bagley much further around the bend, and ultimately inflates to the dimensions of a proper head while reducing Bagley’s own head to the size of a boil! Yikes!
So here we are, with a satire of something that hardly needed satirizing, a message those who need most would never listen to, and a movie that seems to be at least 99 and 44/100ths shouting! Grant’s performance is, I must say, rather astonishing, and there’s no shortage of jolly bile in which to take pleasure! There are also a few rubbery but perfectly acceptable trick effects relating to the talking boil, and Rachel Ward, well-known from pictures like Night School, Dead Men Don't Wear Plaid and The Final Terror, is good in the role of Bagley's wife! There's also an appearance by The Reptile herself, Jacqueline Pearce! Ha ha! But in the end it seems more an exercise, and an exorcism, ha ha, than it does a movie, one with proper characters and sensical motivations!
Don’t get me wrong, I enjoyed the picture! But I think the script needed a little more work before going to camera, and that if Robinson – no screenwriting slouch, ha ha – had only taken the time, he could have delivered his message with much greater effectiveness, and made another great movie in the bargain! I’m going to just sit here and give How To Get Ahead in Advertising two toilet chickens!
Posted by Burl at 23:13