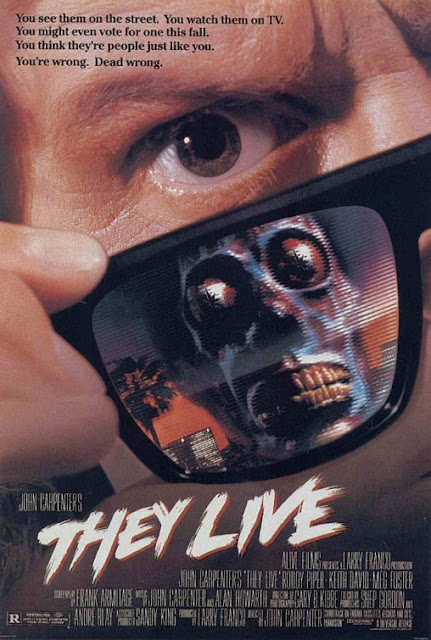 Attention, sleepers, it’s Burl here to let you know just what’s really going on! Ha ha, the movie I’d like to talk about today is John Carpenter’s marvelous mini-epic They Live! Now, we know that for years, Carpenter flung great movies at us like throwing stars – Halloween, The Fog, The Thing and Prince of Darkness, to name only just a few! All terrific! And do you know what? They Live is another terrific one!
But it’s a severely compromised terrific one, ha ha! For one thing, there simply wasn’t the budget to stage the large-scale revolution the movie seems to be angling towards! It’s not just a budget issue though, but, I regret to say, a third-act failure of momentum and imagination!
However, there’s so much that’s good about the picture that it still remains one of my favourite Carpenter movies, and that’s saying a lot! It’s as class-conscious as genre movies get, and probably more relevant today than ever before! Ha ha, one cringes to imagine what the special glasses would show on your computer screen; but on the other hand, it probably wouldn’t have to be too different than what we see already! Ha ha!
I’ll back up a bit and describe the story for those who for whatever crazy reason have never seen this movie: an unemployed construction-drifter arrives in Los Angeles and discovers, by way of a special pair of sunglasses, that the world is not what it seems! In actual fact, the world is black-and-white and is completely run by skull-faced aliens, who occupy positions of wealth, power and privilege while disguised as ordinary humans! No less an authority than George “Buck” Flower, wearing a tuxedo for perhaps the only time in his film career, informs us that there are no countries, no borders, that the aliens are “runnin’ the whole show!”
None of this feels particularly unlikely – it’s as good an explanation as any for the massive income inequality and rampant oppression we see in the world today! For most of the movie, Carpenter does a fantastic job of doling out the situation in spooky little nuggets of paranoia: a ranting street preacher shut down by cops; helicopters circling menacingly; a bearded explicator straight out of Dawn of the Dead appearing on TV, trying but failing to convince his viewers of the truth! We get dropped into the story much as our burly hero does, and are every bit as unsettled!
Carpenter really did a great job casting this thing, because everyone, actors and wrestlers alike, is terrific! Rowdy Roddy Piper does a marvelous job appearing baffled and mind-blown; Keith David, from Roadhouse and The Quick and the Dead, is marvelous as ever; Raymond St. Jacques makes an excellent street preacher (though it doesn’t make a lot of sense for the resistance movement to host his heat-score rantings right in front of their secret headquarters, ha ha!); Peter Jason from Streets of Fire, Dreamscape and Brewster’s Millions does solid work; Sy Richardson from Repo Man shows up as another resistance fighter; John Lawrence, the angry sheriff from The Pom Pom Girls, plays the television beardsman; Meg Foster from Masters of the Universe uses her bright blue eyes to good effect; John Goff from Alligator and Maniac Cop makes an appearance as a frowny businessman alien; and then of course there’s our man Flower, who had a fine role in Pumpkinhead, but may be best known from his role as the skeezy plumber who turned out to be the heroine’s father in Teen Lust! Why the aliens would feel the need to recruit a drawling stewbum into their ranks remains a mystery, but this is truly a film of mysteries!
Ha ha, and I haven’t even mentioned the big alleyway battle, which I won’t because it’s been well-covered elsewhere! I’ll simply say that, flawed though it is, They Live is a terrific paranoid thriller whose reach exceeds its grasp! Well, there are certainly greater sins than that! I’m going to give this fine motion picture three and a half hours long, which is the running time it deserves! Ha ha!
Posted by Burl at 12:51