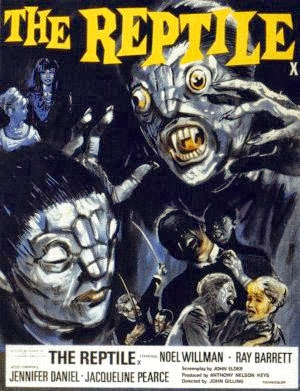 Ssssssss, it’sssss Burl! Ha ha, yes, it’s Burl here to review a snake movie – and no, it’s not Ssssssss or Stanley or Spasms or even Holy Wednesday! And to tell you the truth, it doesn’t actually have a real snake in it at all, just a stuffed one and also a snake lady! And it all takes place on the lovely moors of Cornwall! Ha ha, the picture I’m talking about is of course the Hammer Films production of The Reptile!
I was recently in Cornwall, or anyway nearby it, but in any case decidedly on the moors, so I was quite delighted to watch a picture with a moorish setting! This one starts out just as it should, with a man trudging across the moors, heading toward a distant manor house! On his arrival he’s attacked by something with sharp teeth, scaly skin and a pony tail, and the next thing you know he’s rolling down the stairs and foaming at the mouth!
Well, the man’s brother, Spalding, and his wife, arrive in the town to take possession of the delightfully wrecked Cornish cottage! Everyone in town is sort of mean and unfriendly to the couple with the exception of two worthies: a kindly bartender played by the great Michael Ripper, and a local madman who declares the region to be cursed, cursed I tell you! Ha ha!
Well, the doomcrying madman soon turns up dead as well, and the Spaldings and the bartender form an investigative team to get to the bottom of things! Naturally the lord of the nearby manor (a doctor of theology, not a mad herpetologist as I’d assumed going in), his gorgeous daughter Anna and their sinister, vaguely Asiatic manservant have something to do with the foaming fits and subsequent deaths! And you know what? A snake lady figures into it all as well, ha ha!
The Reptile is not one of the well-known Hammer movies, but I’ve always liked it! It was shot back-to-back, and forms a sort of unofficial Cornwall Duology, with Plague of the Zombies, which is another modest, charming little winner! I count the low ambitions of The Reptile in its credit column actually! There’s something nice about a picture that just says “Ha ha, here’s a movie about a pony-tailed snake lady killing people in a little English village circa eighteen-hundred-and-hulgh-hulgh,” and then follows through on that claim to the letter!
I liked the performances in this picture! Noel Willman makes a good grumpy Lord of the Manor; Jennifer Daniel and Ray Barrett make a bland but perfectly serviceable hero couple; Michael Ripper is always good, and he’s good here; and Jacqueline Pearce, playing Anna, is not only a solid actor, but, as mentioned, very beautiful too! Easy on the eyes as they say, ha ha! It’s a little slow here and there, and not all that much takes place, but if you’re in the mood for it, you’ll have a grand time at the movies! I’m going to give The Reptile two and a half smashed sitars!
Posted by Burl at 21:40