Burl reviews The Serpent and the Rainbow! (1988) 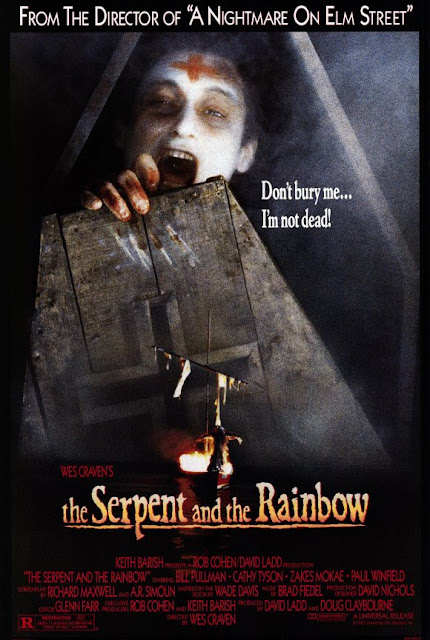 Good day, it’s Burl! How did you sleep last night? Ha ha, you dreamt of me, and of the grave – I know, because I was there! No, not really, I’m just doing some of the scary lines spoken by the villain in The Serpent and the Rainbow! To me he’s always been an unusually effective villain, at least until he transforms into Freddy Krueger near the end! We should recall that Krueger-like faces pop up in so many Wes Craven pictures – this, the Nightmare movies, Deadly Friend, Shocker, probably others – that one assumes he carried a terrible childhood memory of burn wards, along the line of Griffin Dunne’s trauma in After Hours!
Anyway, The Serpent and the Rainbow is quite simply one of Wes’ best! Bill Pullman from Ruthless People and Spaceballs plays a scientist who’s on the trail of a marvelous anesthetic, which he suspects might be the same thing used by voo-doo doctors as a zombification powder! He makes his way to Haiti, which had at that time only recently rid itself of Baby Doc Duvalier and was still in the grip of poverty and desperation, with, as we now know, worse yet to come! Craven’s portrayal of the country is surprisingly gritty and earthbound; it seemed to me at the time almost documentary in its realism! Ha ha, but what did I know: now I can see that, while leagues ahead of most 1980s horror in its attempt to ground its terrors, the picture is still in many ways pretty cartoonish!
Despite not being quite right for the role, which is itself pretty unbelievable, Cathy Tyson from Mona Lisa gives a solid performance as the pretty lady doctor who serves as Pullman’s guide through the brutal politics and strange witchdoctory of Haiti! Even better is Zakes Mokae, known from his appearance in The Island, who plays the evil houngan, who heads up the secret police on the side! Ha ha, altogether a dangerous individual, and the ever-snarling Mokae oozes forth every bit of threat innate to this excellent character, and bathes in it! Ha ha, he’s terrific! We’re also lucky to have Paul Winfield, from The Horror at 37,000 Feet, Damnation Alley, The Terminator and Blue City, in the cast, and Brent Jennings from Fear City and Michael Gough from Top Secret as well! Ha ha, I also liked the guy who played the reanimated hoodoo victim in the graveyard – the secret hero of the picture if you ask me!
The hallucination and dream sequences, Wes’ specialty of course, can occasionally be silly (the long arms! the angry chair!) or over-familiar, but they can be pretty compelling too; and the special effects required to pull off these sequences are for the most part excellent! Ha ha, poor Pullman is really put through the ringer in this one, and there’s one part in particular that’ll have the menfolk crossing their legs for days! It’s still a pretty unique horror picture, and one that has aged very well, even if it has still never really found its audience! I give The Serpent and the Rainbow three prune-faced brides!
Posted by Burl at 14:41

Email ThisBlogThis!Share to TwitterShare to FacebookShare to Pinterest
Labels: 1980s, Craven, horror, saw it on the big screen, supernatural