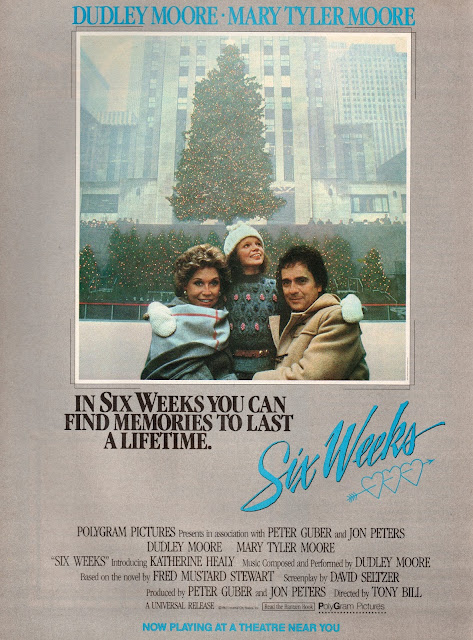 Ha ha, Burl here to review a weepie from the early 1980s! As I’ve explained before, I have a certain fascination with the adult dramas and comedy-dramas of roughly the era 1978-82 – the time frame in which we saw the release of pictures like It’s My Turn, Only When I Laugh and The Last Married Couple in America! My working theory is that I’ve retained the perplexities I felt about adult behaviours and rituals at that formative time, and am looking to these movies for some key to solving them! Ha ha, who knows if it’ll ever really bear fruit, but in the meantime I’ll keep occasionally watching pictures in this genre, just in case!
The one I’m speaking of now is Six Weeks, which I’ve had sitting on my VHS shelf unwatched for a long time! It seemed like December would be the ideal month in which to make a viewing attempt, as it’s plain from the poster and video box that this is a holiday picture! In fact, as was the case with Cobra and Morgan Stewart’s Coming Home, it turned out to have only a small amount of holiday content, but that’s really the ideal for movies like this!
Now, ha ha, we can see that the picture stars Moores Dudley and Mary Tyler, but in this case, the Moore is not especially the merrier! Dudley is a tiny little California politician whose British accent must be explained in dialogue several times, and, to the extent he’s well-known at all, is well-known for using humour in his stump speeches! On the way to a fundraising party being given him, he meets a precocious pre-teen girl, Nicki, whom he casually invites to drop in to the shindig after she gives him directions on how to get there! The girl arrives with her mother in tow, and of course Mary Tyler plays the mother! She seems at first to have held on to the frosty-bitch persona she used in Ordinary People, but it turns out she’s just mad at Dudley because of a misunderstanding: she's revealed to be a cosmetic tycoon in the style of Estée Lauder, Mary Kay Ash or Elizabeth Arden! She apparently has Moore money than all three of them put together, and so she believes that Dudley has merely lured her daughter to the party so he can cadge a big donation!
The daughter develops an obsession with Dudley – not a romantic one (though it’s sometimes hard to tell), but one focused on helping his campaign! Dudley’s campaign manager, played by Joe “Lassiter” Regulbuto, is all for this, but Dudley doesn’t want to do any “babysitting,” and turns the full force of his elfin sarcasm on poor Mary Tyler! However, it turns out that Nicki, as cheery as she seems, is shortly to die of leukemia, so she’s soon helping out with the campaign, making phone calls and pasting bumper stickers onto brown Datsuns! Meanwhile she and the two Moores begin spending lots of time together, forming the de facto family that the girl never knew, and prompting carefully tamped-down r*mantic feelings between the adults!
Trouble is, Dudley already has his own family, and his wife Peg, played by Shannon Wilcox from Zapped Again, is pretty resentful that Dudley is spending Moore time with these other people than he is with her and their son! This leads to many strained discussions and a few awkward, unresolved scenes! Eventually Nicki and the two Moores end up in New York city at Christmastime, where Nicki gets to live her dream of dancing in The Nutcracker! But of course there must be the inevitable sad ending!
I have to say, this picture surprised me a bit! I’m not much a fan of three-hankie weepers, and this always looked to me like the most saccharine, most manipulative thing ever! I pictured endless scenes of the girl in her hospital bed, giving out brave and life-affirming advice to the teary-eyed Moores as she inches closer to death! In fact, after her triumphant turn on the stage, she gets on the subway, twirls around the pole for a minute, then looks stricken, utters her last words – not some fleecy bromide, but a heartrending “It hurts so much!” – and drops dead! Ha ha, it’s much Moore effective than the hospital scenario so many other movies would have chosen!
The adult relationships are Moore realistic than expected also, mainly by remaining completely unresolved! Moore’s wife is still suspicious and resentful and hurt, and while the relationship between the Moores remains unconsumated, it will clearly haunt the margins of their existence for the rest of their lives, Brief Encounter-style! So it’s still not exactly my kind of picture, but it was Moore so than I imagined! Ha ha, I give Six Weeks two Ghost Story posters, which we see plastered on a construction fence!
Posted by Burl at 14:14