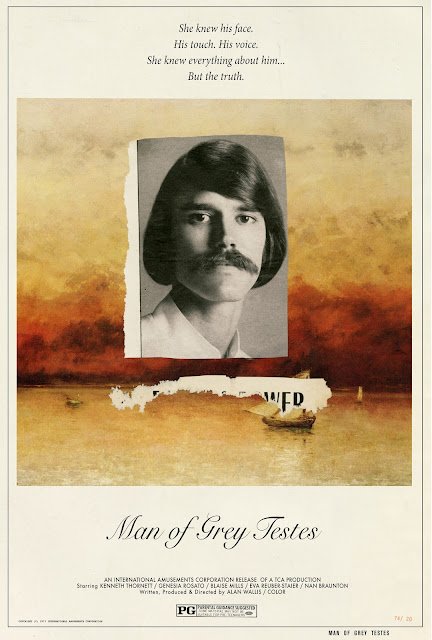 Ha ha, Burl here with another review for you, an unusual drama picture that was completely unknown to me, even as a fan of John “Sunset Cove” Carradine, who has a small role in it! Ha ha, the picture’s called Man of Grey Testes, and I feel confident in asserting that it was a pretty daring production for its time!
Werner Daniels, whose only role this was, stars as Euclid, the titular Man! He sports a silky bowl cut and a fulsome moustache, and moves through the world with Tarquin’s ravishing strides, masterful in the art of love and conqueror of all he surveys! Ha ha, at least it’s that way in his fantasies! In reality, Euclid suffers from a debilitating condition which keeps him meek and mild and shy around the ladies, ha ha! The exact nature of his condition is left a secret for most of the movie, but the title certainly gives us a powerful clue!
Finally, unable to stand his meekness and solitude any longer, he visits a therapist (Carradine, of course!) and is given a species of advice that makes him bolder, though not quite up to the level of his aggressive fantasy persona! Ha ha, it’s a little like when that nerd in Desperate Moves met Christopher Lee and became more self-confident – I guess it’s true that any old horror star might have a natural talent as an alienist! Ha ha, imagine going for a session with Boris or Bela! Or George Zucco!
Anyway, Euclid uses his new-found self-possession to take a run at several ladies of his acquaintance, but a savage debouchment at the hands of a gang of Krishna bikers puts him off! Finally he makes a connection with the washerwoman’s daughter, a pretty scrubberess played by Faith “It Came From Beneath the Sea” Domergue, at least twenty years too old for the role! Ha ha, maybe thirty years too old! But they fall in love, and we are treated to an extended version of the standard 1970s love montage: buying balloons from the balloon man, sharing a hot dog, running on the beach, overlapping exposures of kissing and rolling around!
However, his terrible medical secret is hanging above the relationship like a wrinkled Sword of Damocles, and the crisis point comes when the young, ahem, “young” charwoman discovers what he has been too afraid to say! Will she be able to put aside her horror and disgust for the sake of love? Ha ha, you’ll have to watch the picture to find out!
It’s a pretty solid little movie, even if the situations are a bit on the rote side! The picture has that kind of 1970s energy that I like, raw but overstylized – you might think of it as a cross between Play It As It Lays and Between Friends, if you were looking for a point of comparison, with just a dash of Who Is Harry Kellerman And Why Is He Saying Those Terrible Things About Me! Ha ha! Of course it’s meant to be a romance, but it’s really not too romantic! Werner Daniels is pretty good in the lead role, but something must have gone wrong – he’s not even credited at the beginning of the picture, and as I say, he never worked again as an actor, as near as I can tell! Oh well! The picture was difficult to track down, but well worth it in the end! I’m going to give Man of Grey Testes two and a half bowls of salad!
Posted by Burl at 23:00