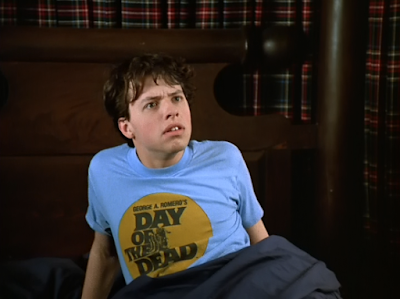 Ha ha, Burl here to review a teen shenanigans picture! No, not one of those Andy Hardy things, but an apparently troubled production called Morgan Stewart’s Coming Home! Ha ha, Ferris Bueller took a day off, Parker Lewis couldn’t lose, and yes, early in this movie, Morgan Stewart does indeed come home!
Now, if Jon Cryer, whom we know from No Small Affair and Hiding Out, ever deplored his resemblance to Matthew Broderick, the feeling probably peaked around the time this picture came out! He was already thought of as the junior league Broderick; why underline it with a title like that? Ha ha, surely to biscuits he was being offered other stuff at the time; but on the other hand, maybe not! Or maybe Cryer had legitimate designs on whatever throne it was that Broderick occupied in 1987, and this was his way of saying “Ha ha, I’m coming for you, Broderick!”
Well, if that was his intention, he should have chosen a really compelling story as his vehicle! Instead we get the tale of Morgan, a likeable enough kid, a boarding school urchin as long as he can remember, with a fabulously wealthy, but distant and robotic mother, and a gormless Republican politician for a dad! One day as the Christmas holidays approach, the parents call him home, and he’s excessively, even touchingly pleased about it!
However, it turns out that the dad’s campaign advisor simply advised that Morgan come home so he can help play happy families on the hustings! We understand from the get-go that this campaign manager is a jerk, because he’s played by poor Paul Gleason, an actor we recall from Night Game and that Christmastime standard, Die Hard! It takes Morgan a long time to realize, or at least to care, that he’s just a political prop! In the meantime he meets a lovely young lady who shares his interests, but the relationship is torpedoed by his increasingly monstrous mother!
An important aspect to Morgan’s personality, and come to think of it the only one, aside from his fundamental decency, that we ever get to see, is his horror movie fandom! I remember being told of this years ago by my pal C. Milligan, Esq., who quoted a PA announcement heard in a mall scene: “Attention shoppers: come and meet George A. Ro-mee-ro, creator of the living dead!” We even catch a glimpse of Romero signing autographs, or at least a bearded actor pretending to be him!
I also related to Morgan’s horror in the heartrending scene in which he discovers that his mother has taken down and destroyed his precious horror movie posters! The same thing happened to me, though my mother did it out of cluelessness rather than malice! Ha ha, I can laugh about it now, but I was disappointed to find my splendid one-sheets for Creepshow, The Thing, The Funhouse, A Nightmare on Elm Street and so forth had been consigned to the shredder! To this day my mother insists she didn’t do it, but who else could have? I ask you, who else?
So all that, and the fact that, like Cobra, this one of those stealth Christmas pictures, is why I finally watched the movie this year! Sadly, it’s a pretty bad picture! Sure, it’s got some appealing elements, but it’s poorly written, formulaic, and in general very badly directed! No wonder old Al Smithee ended up taking the credit, ha ha! The performances are okay, I guess, but Lynn Redgrave is almost too effective as the mother: she’s so horrible, so much like one of the alien people in They Live, that her last-minute transformation into a caring mother is not to be believed!
There’s not much else to say about it: at the end the family is all lovey again, Gleason is in chains, Morgan and the girl are a couple, and, in the most unlikely of events, the dad wins his election, even after being shown up to the world as a hopeless rube! Ha ha, I’m going to give Morgan Stewart’s Coming Home one Day of the Dead t-shirt!
Posted by Burl at 13:18