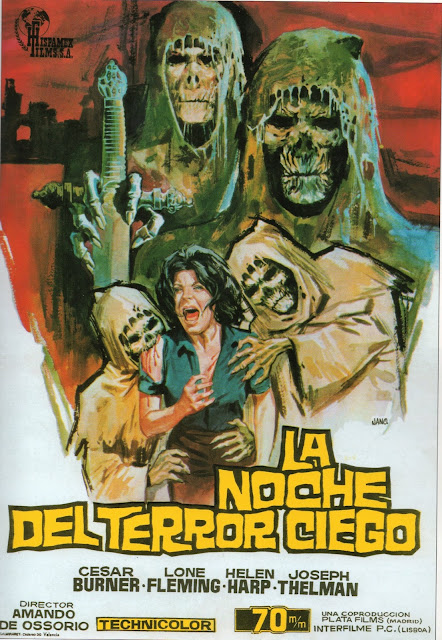 Hola friends, it’s Burl here with a taste of Iberian horror for you! Yes, I’m here to review the very first installment in the four-film Blind Dead series, Tombs of the Blind Dead! I’d never seen any of these pictures and had always been curious about them; now that I have lived to tell the tale, I can pass on my findings to you!
I knew going in that these were essentially zombie pictures, with the twist being that the zombies are blind! Ha ha, they also ride horses, which I think is a pretty marvelous variation on the theme! They seem to have some kind of an agenda over and above that of the usual zombie, but it remains obscure! Finally, like most zombies these fellows enjoy putting a biting on their victims, but ingestion doesn’t seem to be a part of the program! In other words, these guys don’t bite to eat, they bite for the sheer pleasure of biting! Ha ha!
Well I’ll tell you! I watched the full-length Spanish version of the movie, and I can tell you that there’s a good deal of telenovela about it! It starts with two old school chums, Betty and Virginia, reuniting by chance at a fabulous seaside swimming bath in Lisbon! It seems they used to be very very close with one another, but now Virginia has a muttonchop boyfriend named Roger; or at least he appears to be her boyfriend, though there is much talk about them being “just friends!”
Anyway, all of them end up on the world’s slowest-moving train, and Virginia ends up jumping off and walking to an abandoned medieval town with a lot of its real estate occupied by graveyards! Ha ha! Virginia beds down for the night, but bearded, skeletal monk zombies pop up from their tombs, chase poor Virginia around and put a dreadful biting on her!
She herself is briefly zombified, until a conflagration in a mannequin factory that is; and then the rest of the characters, along with a couple of new ones, end up back in the town; zombie monks; bitings and choppings; Betty is chased back to that slowbones little train, and after an eternity of trying to get her onto the darn choo choo, the old beardos climb on too and put pokings and bitings on everyone! Ha ha, and there’s a definite feeling of apocalypto at the end, as so often in European zombie movies!
The soap opera drags it down a bit, but the zombies are great, and actually pretty scary! They ride horses who can only run in slow motion, and that works pretty well too, even if it looks a bit silly when Betty’s riding one, as she briefly does! It gets a bit rapey, unfortunately, so that interrupted my enjoyment! But there was enjoyment, plenty of it, right from the great swimming pool seen at the beginning! I give Tombs of the Blind Dead two and a half flaming backsides!
Posted by Burl at 23:17