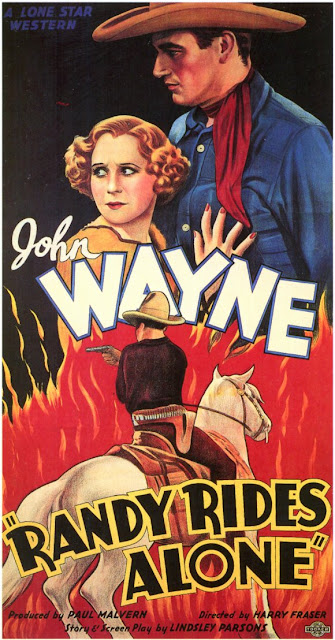 Ha ha and horseshoes, it’s Burl, here to review another elderly oater! This one stars none other than the Duke himself, but a young Duke, early in his ten-gallon career! It’s called Randy Rides Alone, and yes, the Duke essays the role of Randy, and yes, he frequently rides alone!
This picture has an unexpectedly crackerjack opener, ha ha! Randy is just arriving at a roadside rest stop called the Half-Way House, and he comes in the front door to find the barman and all the patrons completely massacred stone dead! A player piano is tinkling out a tune to the corpses, and mysterious eyes are watching through the cut-out eyes of a portrait! Whoa, spooky!
Randy finds a note on the wall from the culprit, while meanwhile, outside, the sheriff pulls up with his pal Matt the Mute and a full posse! Matt mutely hands the sheriff a note telling him and everybody else to be quiet too! Ha ha, so far not a word has been spoken in the picture, and it looks as though everyone will be communicating by notes the whole way through! Sadly this is not to be, however! That old familiar drawl starts up pretty quick, with the Duke protesting his innocence when he’s accused of perpetrating the massacre! Aii yai yai!
Well, from here things mosey along the expected trail, ha ha! There’s a gang, and a secret bad guy played by Gabby Hayes! It’s a duel identity thing, you see, and somehow the way Gabby disguises himself is to become mute, yet to leave notes under his real name, Marvin, in the same exact writing he uses in his guise as Matt the Mute to shove notes in people’s faces all day! I thought that was going to be the big clue, but nope! No one ever mentions the manifestly identical script!
Alberta Vaughan, whom you all probably know from Meet the Quince, is the new owner of the Half-Way House, which, along with the land upon which it sits, is the object of Gabby’s plunder! There’s also a bag of money, just so everybody knows how high the stakes are! And, ha ha, there’s a badguy hideout to rival the one in Ridin’ on a Rainbow!
As in Susanna Pass, explosives have been strewn all about, but an explosion only happens in a fairly hilarious scene at the end, in which the Duke shows how ruthless he can be! He just straight-up lures Gabby into a trap and then blows him up! Or at least arranges for him to be blown up! Ha ha, law enforcement was a slippery concept back then, as it still so often is today!
Anyway, it all goes by in about fifty-three minutes, so why not take a gander at this little oater? The opening is great, though I’d love to see what Edgar Ulmer or Fritz Lang would have done with it; and the Duke is, well, the Duke; the hideout is superb; and it’s nice to see Gabby Hayes in a role where he isn’t just hamboning around advising people to put a poltice on that! Although, ha ha, I like those roles too! Otherwise Randy Rides Alone is pretty standard el-cheapo fare, and I give it one and a half fake moustaches!
Posted by Burl at 00:10