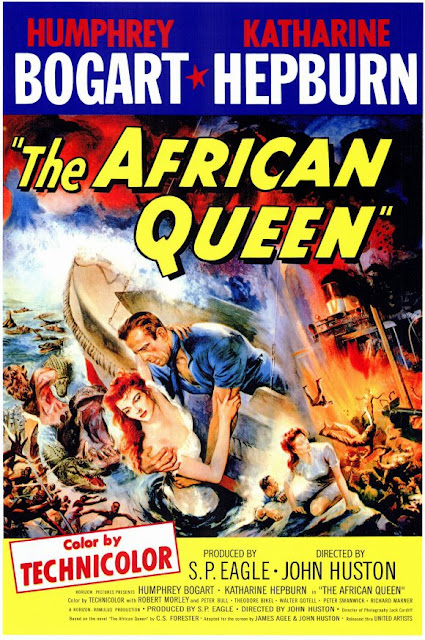 Good day, Miss! It’s Burl here to review one of those movies that are not great classics, not unimpeachable favourites, but simply solid entertainments! The movie I’m talking about is The African Queen, the fine adventure-romance made in Africa by Mr. John "Under the Volcano" Huston! Ha ha!
We all know the story! It’s the dawn of WWI and there’s a brother-sister team of missionaries doing their thing in German East Africa! Their village is serviced by expat Canadian river rat Charlie Allnut and his creaky old launch the African Queen, who deliver supplies, mail, news of current events, and so on! But one day the Germans arrive, and, with their usual subtle grace, burn the village to the ground, kidnap every man of soldiering age and effectively kill the brother-reverend! That leaves the sister, Rose, and grizzled old Allnut chugging down the river on the boat, on a mission (a reluctant one on Charlie’s part) to reach a lake and blow up the German vessel which patrols it! Ha ha!
Of far more importance than this contrived story is Huston’s lush location shooting (photographed brilliantly by the great Jack Cardiff and, backing him up, Teds Scaife and Moore) and of course the two principal actors, Humphrey Bogart as Allnut and Katherine Hepburn as Rose! Both of them are good, if occasionally a little bit hambone, but Bogie in particular surprises with his boozy deference! Ha ha, his hangdog expressions, particularly the one he throws when Rose kicks him out of the minimal shelter the Queen offers during a rainstorm, are priceless and affecting!
Hepburn, meanwhile, is uptight and rather more patrician than one might expect of a dedicated missionary of presumably modest birth, but she’s still her usual live-wire self! I myself have never quite bought the romance in this picture, other than academically; Bogart and Hepburn are perhaps too iconic for me to see them as just two slobs in love! Ha ha! Of course this is largely a two-hander, relying heavily on the aforementioned icons, but there are other people in the picture too, including Robert Morley as the brother – he’s well-known of course from his role as the bad guy in the African Queen rip-off High Road to China – and the great, only recently late Theodore "I Bury the Living" Bikel in the role of the German first officer! And Walter Gotell, so well known from Bond pictures like Moonraker, For Your Eyes Only and The Living Daylights, is in there too!
It’s a crackerjack entertainment, and if it doesn’t achieve brilliance, that’s because brilliance was never really on the menu! It’s as solid as a house and about as comfortable! Ha ha, I give The African Queen three rumbles of the tummy!
Posted by Burl at 10:13