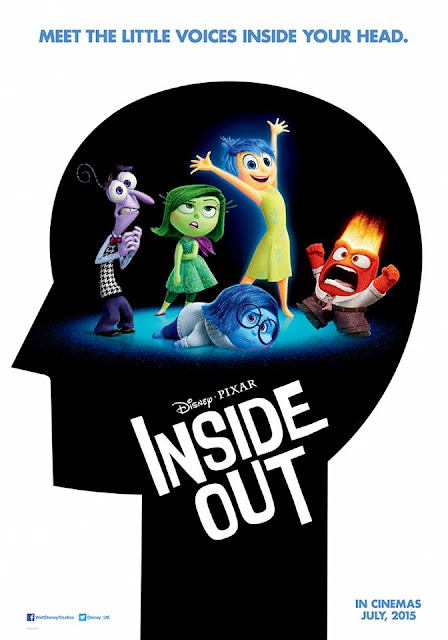 Ha ha, Burl in the house, here to review a children’s cartoon! Yes, I went to see Inside Out, which is the newest children’s cartoon from the people who brought us Toy Story so long ago! And indeed I attended this chidren’s cartoon with a child, and he seemed to enjoy himself; but you know what? I enjoyed it too! Ha ha!
It’s a colourful tale, set largely inside the head of an eleven year-old girl called Riley! Her mind is depicted as a control room staffed by five somewhat arbitrarily-chosen emotions: Joy, Sadness, Fear, Disgust and Anger! (Is disgust an emotion, or would it be classified more as a reaction? Who can say!) True to her name, the girl is living a pretty stress-free life, which explains why Joy is far an away the dominant force in the control room! But of course things go awry: a move from her home in Minnesota to the rollercoaster streets of San Francisco precipitates an emotional crisis that has the emotions in a flurry!
To make matters worse, Joy and Sadness are whisked away to some other part of the brain, and spend much of the movie trying to get back to the control room with the help of Bing Bong, once Riley’s imaginary friend, now forgotten but still roaming the corridors of the young girl’s mind! Ha ha, Bing Bong grew to become my favourite character in the movie, with his ultimate moment almost causing ol’ Burl’s eyes to get a tad misty! Well, that’s being a dad for you I guess! You become a real willoughby!
The picture is all about the bittersweet experience of growing up of course, as all these Pixar movies seem to be! Well, that’s okay, ha ha, it’s a rich subject! It’s been pointed out that this particular movie is only watchable because Riley has no real problems – if we were within the mind of a child in the horrific circumstances in which far too many of them live, it would be a desperate horrorshow! Of course Pixar could not make that movie and expect to turn a profit, ha ha, so as a result, even if the reasons are perfectly explicable, the picture seems a bit of a dodge!
It’s entertaining enough, though! The real-life segments are less so, even if the kindly parents are played by familiar actors Diane “Streets of Fire” Lane and Kyle “Dune” MacLaughlan! The brain interiors are the real heart of the picture, and it’s never less than engaging during these bits! Perhaps things are a little simplistic, and perhaps the movie trips over its own (ha ha) interior logic now and again, but remember, it’s a child’s cartoon!
And if a child’s cartoon is what you want, you could do far, far, far worse than this! It’s colourful, compelling and clever, contains a vocal cameo from Frank “American Werewolf in London” Oz, and the main character plays hockey! Ha ha, an unexpected plus! I give Inside Out three goofball islands!
Posted by Burl at 16:08