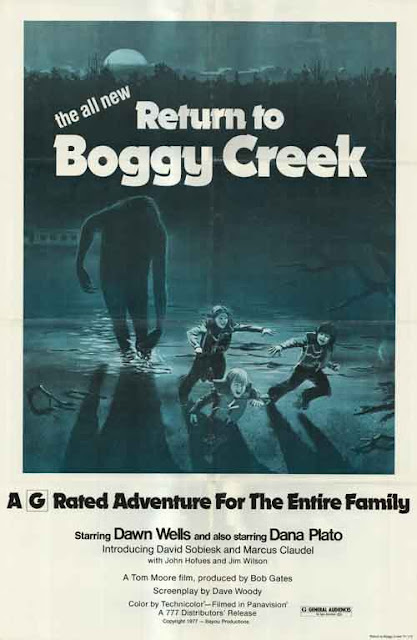 Hi, Burl here with a bigfoot picture to review for you! There are a lot of bigfoot pictures out there of course, and many of them are – ha ha, how do I put this delicately – not very good! And yet most of them have their coterie of devoted fans! Ha ha, except this one, Return to Boggy Creek! Absolutely nobody likes this one!
As a bigfoot completest, I knew this was a movie I’d have to watch sooner or later! I was always kind of dreading it though, for every review takes care to mention how Return to Boggy Creek is a) a kiddie movie, and b) a mind-crushingly boring one! Yikes! And in the bargain, it’s not actually a part of the Boggy Creek series of movies, even though it shares a location (the swampy “bottoms” of Louisiana) with those movies, and a star (Miss Dawn Wells) with the work of original Boggy Creek auteur Charles Pierce! But it's certainly no Boggy Creek II... and the Legend Continues! Then again, what is? Ha ha!
The story places us in the middle of a swamp, where three kids, Evvie Joe, John Paul and mute little T-Fish, are pulling cod from the creek like nobody’s business! Turns out it’s part of a weekly competition, and at the fish market later that day the kids give a hearty ha ha to their nearest competitor, Bruno! Bruno is played by someone who is at once the worst and the greatest actor in the movie, and his line readings are one of the picture’s great pleasures! It makes me sad that all the other reviews of this movie, even that of my pal Bleeding Skull, characterize Bruno as simply bad! He’s so, so much more, ha ha!
As in that fine bigfoot picture Creature From Black Lake, there are also two grumpy old coots, who spend much of the film telling stories, making up the mysterious “catfish kool-ade” the kids use as bait, or getting bonked on the head! They also spend many minutes worrying about something called “Big Bay Ti,” who is the local apeman creature, and who one of the elderlies blames for the death of his son, which is to say Evvie Joe and John Paul’s father! A portly big-city shutterbug who becomes obsessed with photographing Big Bay Ti convinces Bruno to take him deep down the Boggy Creek just as a hurricane is about to hit, and for some mysterious reason the kids, previously characterized as sensible, decide to follow along!
The rest of the film takes place during the hurricane, which means a constant wash of double-exposed wind and rain over the image! Bruno and the shutterbug are clobbered by lightning and falling branches, and then they and the kids are all saved by Big Bay Ti, who also conveniently provides proof that he didn’t kill the dad after all! Then there’s a happy ending and Big Bay Ti disappears off into the swamplands! Ha ha!
Well, there’s plenty of swampy atmosphere here, though not as authentic as we find in genuine backwoods productions like Terror in the Swamp! T-Fish has a wide array of hilarious scared faces, busting out a new one whenever the monster shows up; and there’s also some pretty nice swamp photography in the picture! On the other hand there are plenty of longueurs, a marvelously literal song that outstays its welcome, and not nearly enough Big Bay Ti action! But I’ll tell you this: I’m not sorry I watched the movie! I enjoyed its unhurried pace and its country-fried jocularity, and if you’re in the mood to hang out with some rural kids and their bigfoot pal, you may feel the same! I give Return to Boggy Creek two bottles of catfish kool-ade!
Posted by Burl at 22:54