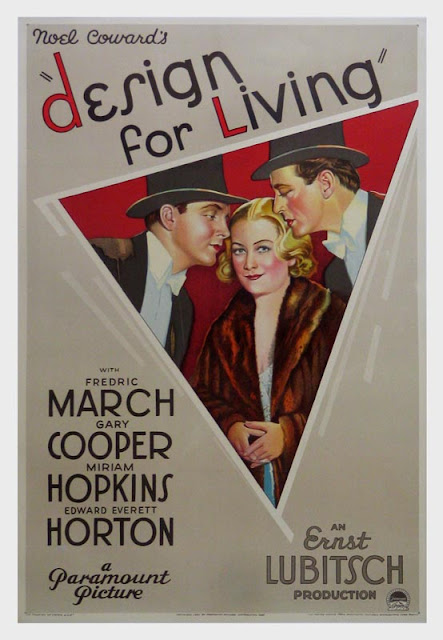 Hi, Burl here to deliver a bit more of the old Burlitsch Touch! Ha ha, I’m not sure if there really is a Burlitsch Touch, but certainly we all know there’s a Lubitsch Touch, and that came of course from good old Ernst Lubitsch, who brought us pictures like Eternal Love, The Shop Around the Corner, and Heaven Can Wait!
All fine pictures in their way, but my very favourite of them all is Design for Living, the picture I want to write about today! Ha ha, this is a pre-Code picture, based on a play by Noël Coward, and is very contemporary in its themes! (They were still making pictures on these themes in the 1990s, though considerably relieved of the wit with which Design for Living is amply supplied – remember Threesomes for example, or Three of Hearts? Ha ha, you don’t? Well don’t worry about it!)
Of course this movie’s best and most relevant antecedent is Jules et Jim, but Design for Living neglects to include the tragic ending, and more importantly omits the implication of mental disturbance as a necessary prerequisite for enjoying a non-traditional romantic or sexual situation! In fact the movie celebrates the capacity for such relationships! Most unusual for 1933, or for almost any period I can think of! Ha ha!
The story kicks off on a train, where two sleeping fellows, Tom and George, are sketched by their compartment-mate, a commercial illustrator called Gilda! (That’s pronounced “Jilda,” by the way!) Tom and George (which is to say Fredric March and Gary Cooper) are old friends and roommates who share a bohemian atelier in Paris! Tom is a playwright, George a painter, and neither can as yet claim much success! Quickly a romantic triangle forms, and this is supplanted by a “gentleman’s agreement” whereby the happy-go-lucky Gilda, played by the delightful Miriam Hopkins, becomes the pair’s “art mother,” and guides them to success and acclaim!
But of course the gentleman’s agreement falls apart (“I, unfortunately, am no gentleman, ha ha!” Gilda laments), and matters are further complicated by a stuffed-shirt advertiser played by Edward Everett Horton! (He played these roles whenever a snippier version of Ralph Bellamy was required!) “Ha ha, immorality may be fun, but it isn’t fun enough to take the place of one hundred percent virtue and three square meals a day!” says Horton several times!
Anyway, the picture is very funny, and the script, which was by all reports, especially screenwriter Ben Hecht’s, vastly overhauled from the original Coward play, is a constant delight! All the performances are good, but I was especially taken with Coop, to tell you the truth! And can you imagine a movie featuring both Edward Everett Horton and Franklin Pangborn? Ha ha, friends, this is it!
Yes, this really is a great picture, and almost certainly my very favourite romantic comedy ever! I mean, When Harry Met Sally is fine and all, but this is the real deal! I give Design for Living four Eaglebauers, which is the highest number of Eaglebauers I have ever awarded a film! Ha ha!
Posted by Burl at 16:11