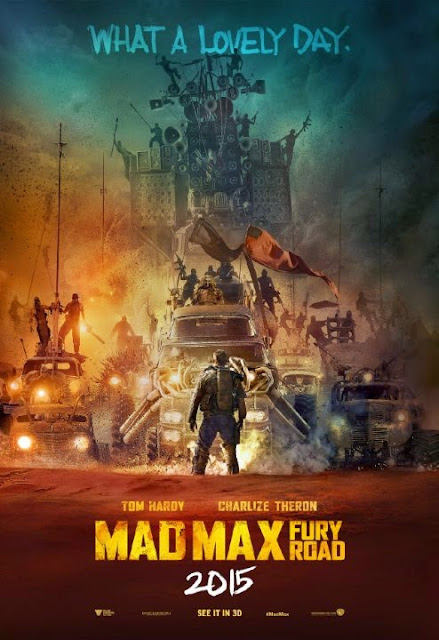 Brrrumm, brrrumm, it’s Burl, here to review a nitro-burning automotive action picture, that new picture from the eminence gris of funny car calamity, George “The Witches of Eastwick” Miller! Of course I’m talking about his newest Mad Max picture, Mad Max: Fury Road! Ha ha, that’s right!
I can’t tell you how pleased I am that Miller is the one directing this, and, ha ha, not some television commercials director! It’s been quite a while since that old bushie boy took on the crashing cars, the eruptions of flesh and metal, the high-octane mayhem; but on the evidence he seems over the past thirty years to have been thinking of nothing else! In any case, Miller and his similarly superannuated cinematographer, John Seale, have certainly delivered a movie with no shortage of pep!
Tom Hardy is our new Max, taking over from the unpleasant crazyman who had the part before, and he’s perfectly good in the role, even if he never seems to have suffered as much abuse as we see him undergo, and as is implied! He also suffers from visions of past traumas, and this is a device which I for one could have easily done without! Ha ha!
Charlize Theron, well-known from Prometheus, is the picture’s alternate protagonist, a short-haired lady truck driver with a mission to steal away five beauty-ladies from the skull-masked bad guy Immortan Joe, who by the way is played by the old Toecutter himself, ha ha! She wants to take these ladies to The Green Place, which is not in fact the neighbourhood plant store, but rather the same imaginary patch of Shangri-La people in these post-apocalyptic movies are always searching for!
But Immortan Joe, tubby and pustulated in the classic Baron Harkonnen style, will not stand for this insubordination! He seems a reasonable man, but draws the line at lady-stealing! So the chase is on, and soon a crazy cavalcade of conveyances is hurtling across the Namibian desert! It’s very like Mad Max II, aka The Road Warrior, since everyone is after the same gosh-darn big rig! (Ha ha, in that sense it’s as much a trucker picture as White Line Fever or even High-Ballin’!)
Of course there are crazy stunts galore, which were apparently mostly filmed without the usual CGI enhancements; but any verisimilitude this process lends was undermined by the usual claptrap 3-D at the screening I attended! Ha ha, sure, stuff was flying around a bit, but I think they ought to just leave these movies flat! If I were to see this picture in the cinema again, it would be the flat version hands down!
I hear you asking, ha ha, Burl, but is the movie any good? Well, sure! It’s exciting and exceedingly well done in every department, and it’s great to have that marvelous desert car-crash sensibility at work again! I’m an unabashed fan of all three previous Mad Max movies, and this one fits nicely into the series! As spectacular as it is – ha ha, they didn’t spare the samoleans on this one! – I still prefer the more modest Road Warrior! But if you like goofy names and car crashes, this picture should be in your top four picks! I’m going to give Mad Max: Fury Road three chapped lips!
Posted by Burl at 20:30