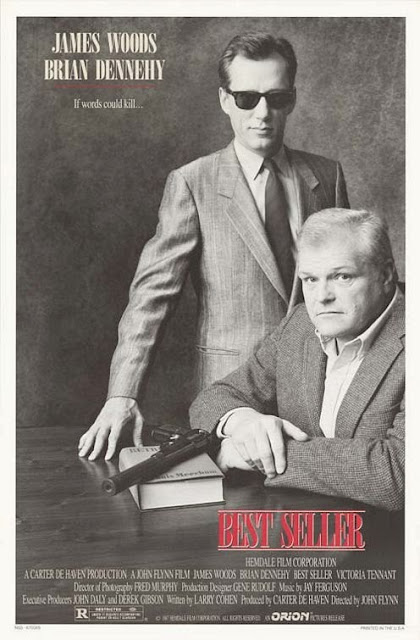 Ha ha and chickenpox, it’s Burl, here to review a face-off between two pretty interesting actors, James “Night Moves” Woods and Brian Dennehy, fresh off of The Belly of an Architect and F/X! It’s kind of a wonder that I’ve never seen this before recently, considering that I like both those guys, as well as screenwriter Larry “half of Deadly Illusion” Cohen and director John “Rolling Thunder” Flynn!
The movie’s called Best Seller, and it has a very Cohenian premise: an ex-cop bookwriter, probably based on Joseph Wambaugh, is looking for his next big book subject, and along comes a weasel-faced killer who wants to spill the beans about his life as a trigger man and, more specifically about the work he does for a certain shady businessman! Naturally the businessman is not happy about this!
The picture suffers from taking the lack of trust that should be strictly a first-act conflict and making it the driver of the entire second act as well! Sure, Dennehy might reasonably demand a little proof of Woods’s intentions and truthfulness, but after a while, you know, move on! Ha ha, at least from a narrative point of view, that’s the way to go! Having Dennehy continually refuse to take Woods at his word leads to an extended feeling of stasis and repetition!
We are treated to staging and mise en scène that frequently make it seem as though the two leads are on a romantic date, ha ha! If this was a directorial decision, I applaud it! Seeing two tough guy actors lying across a frilly bed having an earnest discussion is a real spectacle, and distinctly novel – I’m trying to imagine, say, Robert Ryan and Bob Mitchum doing the same thing, but, ha ha, cannot!
It’s just as much a squib movie as Fatal Beauty, which is nice and very 1980s! The supporting cast, featuring Paul Shenar from Scarface and Victoria Tennant from All Of Me, is disappointingly unmemorable, but this picture is all about its principals, and of course Woods and Dennehy are top-flight as always!
This picture got plenty of acclaim when it came out, as I recall, but doesn’t quite live up to it in retrospect! Ha ha, perhaps at the time it seemed a lot fresher! At any rate, it’s still a very decent B picture, tough and amusing (though undercut by one of the worst musical scores ever heard), and I’m going to give Best Seller two Richard Nixon masks!
Posted by Burl at 09:45