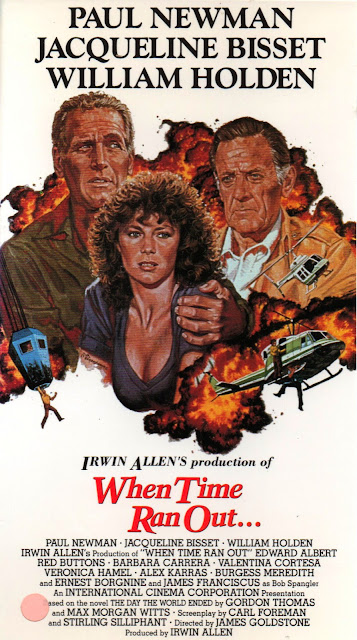 Boom, crash, aieeee, it’s Burl! Yes, those are the sound effects typically heard in a disaster picture, and today I’m going to review the biggest disaster of them all, Irwin Allen’s gigantic megaproduction When Time Ran Out…!
Like the previous Allen triumph The Towering Inferno, this one features Paul Newman wearing a hardhat! (He also wears the hat from Hud, ha ha!) But it must be said right off the top that this picture represents neither Irwin Allen’s nor Paul Newman’s finest moments! You could watch The Silver Chalice a thousand times and it still wouldn’t be as bad as When Time Ran Out…!
Ol’ Burl does enjoy a disaster picture, ha ha, so I was pretty sure I’d be able to overlook the inevitable dramatic, performative, pictorial and structural flaws in this one and milk some good-time enjoyment from it! But the movie is so absurdly top-loaded with soap opera that the real disaster is not the flying fireballs, tsunamis or lava flows, but the slow crushing weight of stilted melodrama! My gosh, there are probably more soap suds in this picture than in all the Airport movies combined!
The set-up is as follows: Newman is an oil man supervising a drill site on a remote Pacific island that is definitely not part of the Hawaiian archipelago! The island is owned by Newman’s oil partner Bob Spangler, a hotelier played by the poor man’s Charleton Heston, namely James Franciscus, who is married to Veronica Hamel, the daughter of his other business partner, William Holden! Ha ha, with me so far? Franciscus is having an affair d'amour with an island lady played by Barbara Carrera, and she in turn is engaged to Edward Albert, the manager of the hotel who is secretly the half brother of Bob Spangler! In the meantime, Burgess “Grumpy Old Men” Meredith and his wife, retired high-wire walkers, are on the island for one last fling before her heart gives out; and Red Buttons, a white-collar criminal, has been pursued there by New York City cop Ernest Borgnine!
Ha ha, all of this takes a while to set up, and on top of it you have the science lab at the opening of the local volcano crater and the endless arguments about whether the volcano is going to blow! Bob Spangler is the bad guy here, out-Hamiltoning both Murray Hamilton from Jaws and Linda Hamilton from Dante’s Peak in his energetic disavowals of any possible disaster! But that’s okay, because in one of the movie’s best parts, Bob Spangler, his hotel, his absurdly loyal wife, his thick-headed girlfriend and all the silly guests who were dumb enough to stay at the hotel rather than seek higher ground with Newman and most of the other stars, are wiped out instantly by a giant lava bomb! Ha ha!
The thing with this picture is that, while there are a few good bits here and there (the lava bomb, the tsunami that gets both Alex Karras and his fighting cock, Pat Morita tumbling into lava, and a bit with a precarious volcano elevator), even the disaster movie parts are so slowly-paced as to be nearly as tedious as the romance-drama! The climax involves a lot of slow creeping across a disintegrating bridge, and this seems to take forever! And dramatically the movie is all askew: if you ask me, the real hero of the picture is Burgess Meredith, not Paul Newman (who was by his own admission only around to pick up a paycheque anyway), and the most touching relationship is between Buttons and Borgnine! It’s got to be one of the very worst disaster pictures ever made, ha ha, and it’s my privilege to give When Time Ran Out… a grand total of one unlucky bearded scientist!
Posted by Burl at 14:35