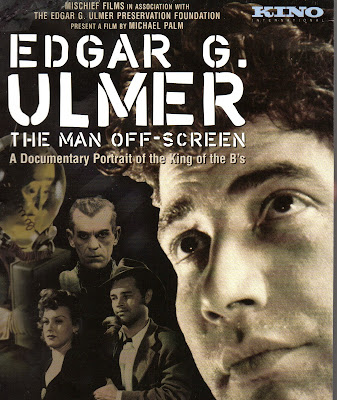 Hi, Burl here, to review a documentary about a fine director of olden times, Edgar Ulmer! The movie is called Edgar G. Ulmer – The Man Off-Screen, and it purports to give us a portrait of the man behind such wonderful motion pictures as The Black Cat, Detour and of course Strange Illusion!
The picture certainly has a lot going for it! Ulmer’s daughter participates – she was one of the producers in fact, I believe – and has a lot of insight, of course! And then there’s a wide range of interviewees, like Joe “Matinee” Dante, or John “¡Three Amigos!” Landis, or Wim “Lightning Over Water” Wenders! These are engaging and intelligent fellows, and they have plenty to say about Ulmer from an informed film fan’s remove! Ann Savage, the star of both Ulmer’s Detour and Guy Maddin’s My Winnipeg, shows up too, and gives a pretty good account of the making of Ulmer’s classic six-day wonder! The lead actor from Strange Illusion is also in there, and it’s great to see him too!
But the movie is hampered by various attempts at style which don’t really come off! Presumably inspired by the road movie ethos of Detour, many of the interviews take place in moving cars, which is hardly fatal, but is both distracting and a little misleading! It’s not as though Ulmer was so well known for his love of filming in cars or anything! You may as well film an Ingmar Bergman doc entirely in a car just because he made Wild Strawberries! Ha ha!
There are other location choices that are mildly off-putting, like the big Vienna Ferris wheel! Ha ha, I’m not saying that should only be used in a documentary about Carol Reed, but that should only be used in a documentary about Carol Reed! And there are two movie nerds who get interviewed in a Hollywood graveyard, and that doesn’t really work either! The bits with the car in the studio in front of a back projection don’t work they way they’re supposed to either – something about the way they’re shot totally fails to bring us back into that creaky Monogram studio in the mid-Forties the way it’s intended to! A noble idea, but the execution just doesn’t make it!
I don’t want to be too down on this documentary production, though! As I say, there are many interesting interviewees and fascinating facts! The filmmakers may have ended up with a bit of a dog’s breakfast style-wise, but at least they tried to mix it up a bit and go beyond the standard talking-heads-and-clips thing! And they deserve kudos for making a documentary on Ulmer at all, I say! And an extra bonus is that the DVD of this documentary includes an entire Ulmer picture, Isle of Forgotten Sins, as a bonus feature! Ha ha, look for a review of that one some time soon!
Well, maybe Edgar G. Ulmer – The Man Off-Screen didn’t rise quite to my exacting standards of documentary bio-pics about B movie directors, but there’s nevertheless much to admire here, not least the fact that it exists at all! I give this picture a hearty two Hollywood strip malls!
Posted by Burl at 19:02