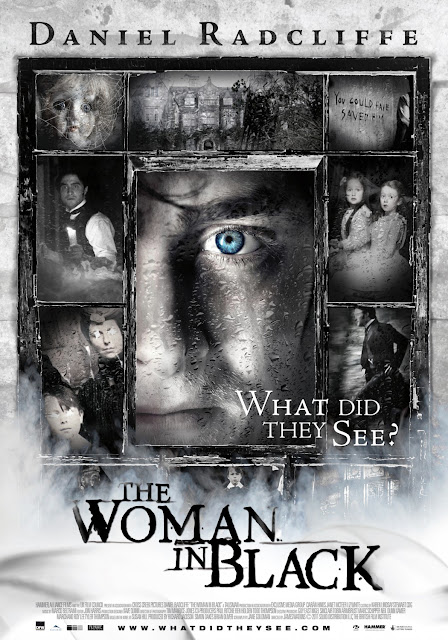 Bo-o-o-o-url here to review a spookhouse picture of quite recent vintage, The Woman in Black! Like Witchtrap, it’s a haunted house movie, but in all other respects the two movies are not really very much alike! No nak*d ladies get impaled in the throat by shower heads, so I guess you might say this is more in the tradition of a picture like The Haunting!
It was the first non Harry Potter movie featuring the guy who played Harry Potter, and so, since I’ve never seen any of those Potter pictures, it was my first exposure to this frequently morose and bespectacled thespian! He seems to be a fine enough actor, what with his British training and all, though he doesn’t have all that much to do in this movie except to look a little frightened in those brief moments when he’s not being morose!
He plays a mighty young lawyer in Edwardian London, and though he seems at about the age where most Edwardians lose their v*rginity to a S*ho lady and join a sportsmen’s club, he’s already a widower with a four year old son! He’s tasked by his stern barrister boss to settle the affairs of a haunted house, and so up he travels to some barren and remote seaside area, where the townsfolk make the pub denizens from An American Werewolf in London look like the hospitality staff at Disn*yland!
The spooky old mansion is situated on a property connected to the mainland only by a thin ribbon of road that’s washed right over at high tide! Strangely, however, there’s never any scene where he badly wants to leave the place because of ghosts, but is stranded by the water! Ha ha, that seems odd to me! Anyway, the town near the mansion is plagued by a rash of child suicides, which is pretty horrible! It’s no wonder the townspeople are a little weird! Daniel Radcliffe – that’s the Harry Potter actor’s name – sets about trying to figure out the mystery, which he does quite quickly, because there’s not much to this mystery, I’m afraid!
The haunted house movie this reminded me of the most was The Changeling! Ha ha, do you remember that one? George C. Scott was in it, and also a terrifying wheelchair! I haven’t seen that one for quite a while, so maybe I’ll watch  it again soon and review it for you here! There are also elements of Ghost Story in there too, and I’m going to re-watch that one soon as well!
In any case, The Woman in Black is a fairly solid little picture with a few eerie scenes and a couple of really good scares, but even with its heavy suicide theme and an ending that could fairly be described as downbeat, it’s about as substantial as the wrathful wraith of its title! It looks good, is acted well, and is overall an addition to the haunted house genre that nobody should be embarrassed of! I give this stately picture two and a half self-rocking chairs!
Posted by Burl at 20:19