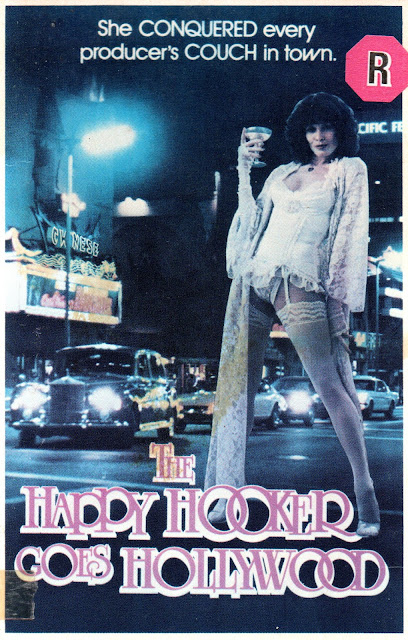 Here’s Burl! Yes, it’s me, here to review an odd picture from many years ago! This one is called The Happy Hooker Goes Hollywood, and it was the third and last in a series of Happy Hooker movies that were based on the autobiographical book by Xaviera Hollander! Ha ha, she was apparently a jolly pros'tute herself, but just what her specific adventures were I do not know, as I’ve never read the book and this is the only Happy Hooker picture I’ve seen!
But based on the plot synopses I’ve read, it sounds like the most interesting of them! The first one tells of her arrival in New York and the setting up of her first brothel; in the second she travels to Washington and testifies before a Senate subcommittee (ha ha, yaw-w-wn!); and in this one she descends upon Hollywood and supervises the filming of what I guess is meant to be the first movie in the series! Ha ha, the snake eats its tail yet again! And another interesting thing is that she’s played by different actresses in each movie: Lynn Redgrave in the first one, Joey Heatherton in the second, and Sister Hyde herself, Martine Beswick, in the third! Martine is my favourite of the three, so again, I’m glad this is the one I watched!
After a tender scene at the beginning of the movie between Xaviera and a New York cop played by none other than super-thespian Dick "Sorority Girl" Miller, Martine hies to Hollywood and gets mixed up with a movie studio run by mogul Phil Silvers, well-known from The Chicken Chronicles! And guess who works for Phil? A guy who looks just like him except a bit younger, plus the best of the Bat-Men, Adam West! Adam plays the sleaziest guy seen on cinema screens since the yachtsman from Summer Night Fever, or maybe the songwriter guy from Goin’ All the Way! Anyway, he’s pretty sleazy!
Once Xaviera has been disappointed in love by Adam West and in business by Phil Silvers (or maybe it was the other way around!), she hooks up with Phil’s grandson, played by Jack Lemmon’s son Chris, and goes the independent route to get her film produced! Her stable of prostitutes lie down and get to work raising the budget for the picture, and it all looks promising until Phil Silvers pulls a dirty trick and gets them all busted! But Xaviera gets her revenge, working it so that Adam West and the guy who looks like a younger Phil Silvers end up making sweet love with one another by mistake in the dark, and then dressing up as ladies! Ha ha! Then she makes a bet with Phil that she can finish her movie in time to meet an arbitrary deadline!
The climax involves a car chase and lots of goofy humour, and while most of it is pretty dumb, believe it or not there are a couple of funny parts! At least one of them is thanks to Adam West and his fine performance! There are also quite a few naked ladies, and of course the tender surprise appearance by Dick Miller! Altogether, when you take into account its cast, its severely late-70s atmosphere, its clever satirizing of the movie business (on a par with Hollywood Boulevard, I’d say!) and its general entertainment value, The Happy Hooker Goes Hollywood is good for at least two and a half special appearances by Army Archerd!
Posted by Burl at 17:25