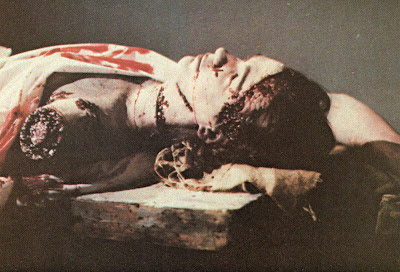 That’s right, it’s Burl here, with a review of another slasher picture for you! This one is particularly grimy and low-budg, and though it was originally called Death Dorm, a perfectly good title, it was eventually released into the world as The Dorm That Dripped Blood! Apparently this got a spiffy blu-ray release recently, but I don’t have one of those special machines, so I just watched the VHS tape! Six of one, half-dozen of the other, I figure!
This is not quite at the bottom of the heap budget-wise – in fact there are quite a few Dantean circles below it – though it was clearly done on a shoestring! But they still managed to sneak some genuine and quite effective Special Makeup Effects into it, which is always welcome to see! In many ways, in fact, The Dorm That Dripped Blood is, while far from perfect, a sort of ideal early-80s slasher picture: not good precisely, but the sort of thing you’d hope and expect to get when you pop in the tape!
The story is pretty simple! At a college which seems to exist in the warehouse district of some particularly depressed city, a dormitory building is set for demolition, and over the holidays a group of students are tasked with cleaning the place out in preparation! Of course there’s a killer lurking about, someone who murders not with the standard kitchen knife, but with whatever handy items are sitting around! He gets busy with a nail-filled bat, a garrote, a car, a drill, a giant pot of steam and some other stuff! And he knocks off Daphne Zuniga, well-known from her appearances in The Sure Thing and The Initiation!
For quite a while it’s assumed that the culprit is a bug-eyed, frizzy-haired guy named John who just hangs around the building! Ha ha, is he a student? If so, what is his major? Is he a handyman? No, there’s already one of those, and he gets a drill in the head, ha ha, yowch! I don’t want to spoil whether or not John is the killer, but if you don’t recognize the most crimson of herrings when you see one, you’ve never seen one of these pictures before!
When the culprit is revealed, it doesn’t make any more or less sense than if it were any one of the other characters! And then the whole thing wraps up with a particularly bleak ending, which serves to place The Dorm That Dripped Blood in a slightly different category than most other such pictures, where it sits side-by-each with The Prey!
This was the first effort from the same guys who made both The Power and The Kindred! Ha ha, I now seem to have reviewed the bulk of their efforts, and each of them has something to recommend it! For instance, a guy named Matthew Mungle did the Special Makeup Effects for them all, and his work is pretty solid! The Dorm That Dripped Blood falls into many of the usual slasher movie pits: too much wandering up and down dim corridors, characters unburdened by any dimension or motivation, boring scenes filled with chat and an impenetrable, inky blackness within which are occurring things we will never be privy to! But it serves as an exemplar of sorts, and has a real barbed hook of an ending, so I'm going to give it two puffing smokestacks!