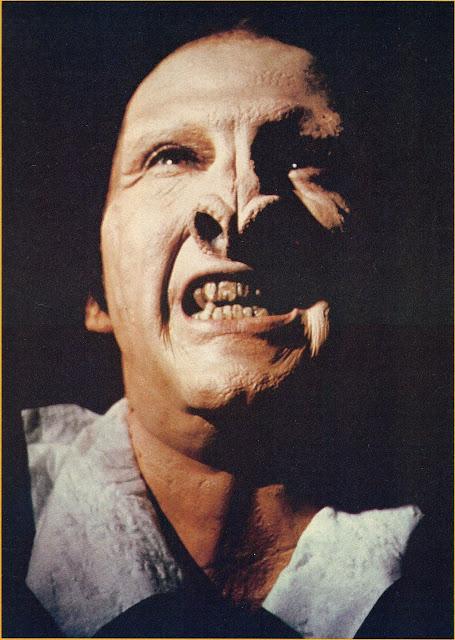 Yes, that’s right, it’s Burl! You probably already know how much I enjoy reviewing movies from the Goopy 80s Makeup genre, pictures like Mausoleum, Forbidden World, The Outing and many others! Well here’s another one, an earlier effort from the guys who brought us that goopy semi-classic The Kindred!
This one is called The Power, and the vagueness of that title is reflected in just about every other aspect of the movie! It takes a while for the hapless viewer to get his or her footing, because we start with some characters who aren’t our protagonists by any stretch, but their introductory scenes go on for so long we can be forgiven for thinking they must be! It seems there’s a tiny Aztec idol which somehow finds its way repeatedly into the United States to cause havoc and destruction! First a college professor has it, and after it gives a smart-alec student a nosebleed and another guy a crick in his neck, it sends the professor up to get impaled by his flagpole! Ha ha, it’s a pretty good trick effect!
Next there’s a scene in Mexico where the guy who got the crick in his neck is looking for the idol! Apparently after each visit to America it returns home to live with an old man and his grandson, who keeps it in a special secret place away from prying gringo eyes! But for some reason they bring it out anyway, and even let the crick-neck fellow hold it, and of course he gets idol fever and goes bats, whereupon he shoots the idol’s keepers and then has a terrible bleeding attack!
In some crazy leap I didn’t understand, the idol heads back to the States and we meet a whole new group of potential protagonists, including a trio of intrepid high school students, a lady journalist named Sandy who does crazy tabloid stories about Bat Boys and Wrestling Cheeses and suchlike, and also her pal Jerry, who wears the most extraordinary curly mullet and comes to stay with Sandy! Well, the kids somehow get their hands on the idol, then Jerry, an easygoing guy, becomes obsessed with it and turns into a maniac! He soon transforms into a pig, and next thing you know he’s on a porcine murder spree! Eventually, in front of the people he’s tried to murder but hasn’t quite managed to yet, he bursts at the seams! Then there’s a long coda involving the crick-neck and another character, and of course a twist ending which underlines the movie’s tagline and thesis: “When Will Mankind Learn? It Cannot Be Destroyed!” Ha ha!
If that plot description made only a little sense, and seemed to have no structure or direction, or any particular raison d’etre for anything that goes on, then guess what! You’ve just had a taste of what it’s like to watch the movie! Ha ha, there are good bits in it though, plenty of them! One of them might have been a mistake though, somewhat reminiscent of when David Lynch saw a crew member accidentally reflected in a mirror during the making of Twin Peaks and thought it would be a good spooky moment to leave in! There’s a nightmare sequence involving arms popping out of a bed that’s as good as anything Wes Craven ever came up with! And there are a few bits of imaginative staging and trick effects and bits of business that leave you pretty impressed with the movie!
But the dialogue smells pretty badly and the story is a mess! You keep waiting for somebody to assert themselves as the protagonist and it never quite happens! The long multiple introductions take up too much time, and the baton-passing structure becomes tiresome, making the eighty-seven minute movie seem much longer! And what does the idol want? Why does it kill? What does anyone think they’ll get out of owning it? I don’t think the filmmakers really thought any of these questions through! One thing though: the score is fairly ambitious and impressive, and often sounds like that tinkling music they put behind montages of great cinematography!
Ultimately though, ol’ Burl is kind of a sucker for these low-budget goopy makeup movies! This one was clearly made by a bunch of people who really put their hearts into it, and that’s always nice to see! So despite its many faults and the fact that it really isn’t all that good, I’m going to give The Power two and a half swinging kitchen doors!
Posted by Burl at 23:20