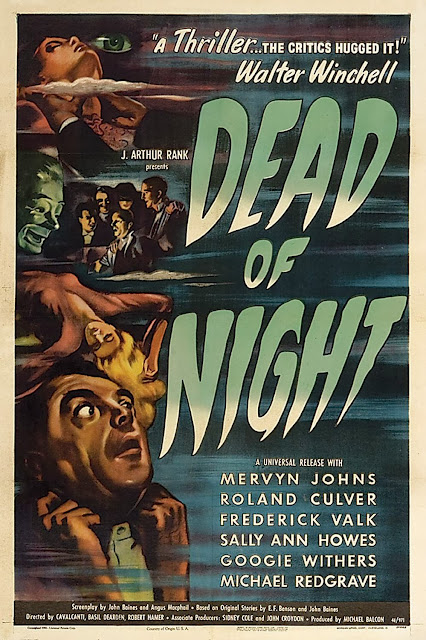 Ha ha, it’s Burl here, reviewing a classic anthology spookshow! Most such pictures have one or perhaps two segments they’re most renowned for – if renowned they be at all! Who remembers anything from Trilogy of Terror aside from the Zuni Fetish Warrior Doll segment, for example? And can you point me out a story from Screamtime other than the Punch and Judy chapter? Ha ha, I thought not!
Dead of Night has a most famous segment of course: it’s the ventriloquist dummy one! And, ha ha, it is pretty eerie! But I think all of them are pretty solid, even the one about the ghostly golf players, which is admittedly a hiccup in the horror! I’m not a golfer myself, but for some reason I like golfing in movies, or at least in British movies! I’m a particular fan of the golf sequence in Goldfinger! (I’m not about to run out and see Tin Cup though, ha ha!)
The mysterious mirror story, in which a young fiancé sees the domicile of a roaring old sadist’s 19th Century parlour in the reflection of his newly acquired mirror, is a pretty good one! The racecar driver who receives a chilling premonition is not bad! The girl at the Christmas party who encounters a ghost boy is fairly minor, but benefits from thick atmosphere, solid performances and good art direction! And then there are the linking segments, typically the low points of any anthology, but here, I think, pretty solid, right up to a bone-chilling conclusion! Ha ha!
Of course everyone is terrified of ventriloquist dummies, so it’s natural that the story of the little lap-mannequin is the most fondly recalled of the bunch! Hugo is certainly a nefarious creation, and the ending to this one, a presentiment of Psycho, must have seemed pretty grim to mid-1940s audiences! Ha ha!
The picture was directed by a few different gentlemen, among them Alberto “Went the Day Well?” Cavalcanti, Basil “The Man Who Haunted Himself” Dearden, Charles “The Lavender Hill Mob” Crichton and Robert “Kind Hearts and Coronets” Hamer! It’s a strong group, and their styles are similar enough that the picture doesn’t suffer from the lack of cohesion one might expect from a multi-director piece!
Ha ha, to me it’s not the grand, world-beating classic I’d heard it was for years before I saw it! Watching it more recently I found a well-crafted spook piece, plenty eerie and filled with good moments! I’m going to give Dead of Night three withered googies!
Posted by Burl at 21:58