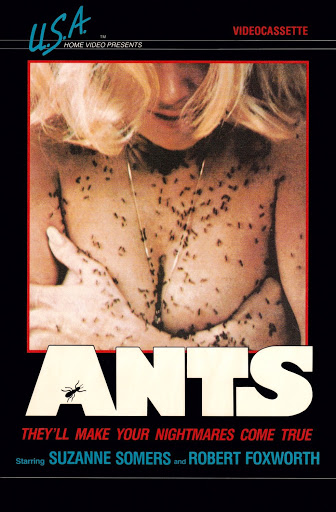 Beedlee-beedlee-beedlee it’s Burl, here with another movie about insects on the attack! Yes, it’s time for ants in the pants with a TV movie called, simply, Ants!, though it’s also known by the more cryptic title It Happened at Lakewood Manor! That’s the title under which I first became familiar with the movie, but I do believe Ants! is the proper and original moniker!
Anyway, Lakewood Manor is a thriving if old-fashioned resort hotel run by an old wheelchair lady played by Myrna Loy from Another Thin Man! Her daughter, Lynda Day George from Mortuary, is trying to get her to retire from the hotel business, and there’s an abrasive businessman who wants to buy the place! Meanwhile, there’s construction of an indeterminate type going on in the front yard, with boss Robert Foxworth from Death Moon and Prophecy, and his foreman Bernie Casey from Never Say Never Again running their tractors back and forth!
But right off the hop, things go wrong! A construction worker falls victim to a mysterious something under the ground, and when another goes to help him, they are both buried alive! Realizing their mistake, Foxworth and Casey dig their co-workers out, and in the process are bitten by ants! Ha ha, and when first a young boy playing in the garbage, and then a kitchen worker doing his job are found with toxic poisoning, Foxworth begins to suspect the ants are responsible for all the trouble! But people just laugh at him, in particular the government safety monitors who’ve been giving him trouble and who seem like beta versions of the EPA guy in Ghostbusters!
So, desperate to prove his formic theory, Foxworth jumps in his front end loader and bashes at the dirt in which he believes the ants are living, with the result that he enrages them so much they attack the hotel and kill several people! Ha ha, well done Foxworth! It all comes down to a scene in which Foxworth, George, and the real estate guy are all sitting in one of the hotel rooms, covered with ants and breathing through tubes of rolled-up ugly wallpaper! Then the developer gets ants in his pants and jumps out the window, ha ha! Truly a thrilling climax!
Brian Dennehy from F/X and Best Seller has meanwhile made a surprise appearance as the local fire chief who can barely believe his eyes every time he looks at the strange blurry blob that is supposed to represent millions of ants! It’s the sort of special effect you expect from a 70s TV movie, but it’s still pretty bad! (Not a patch on the spider transformation in Curse of the Black Widow, or the guy falling out of the plane in The Horror at 37,000 Feet!) But never mind the bad special effects, lousy script, barbiturated direction and robotic acting: it’s horror TV from the 70s, so I enjoyed it! I give Ants! one and a half trenches of fire!