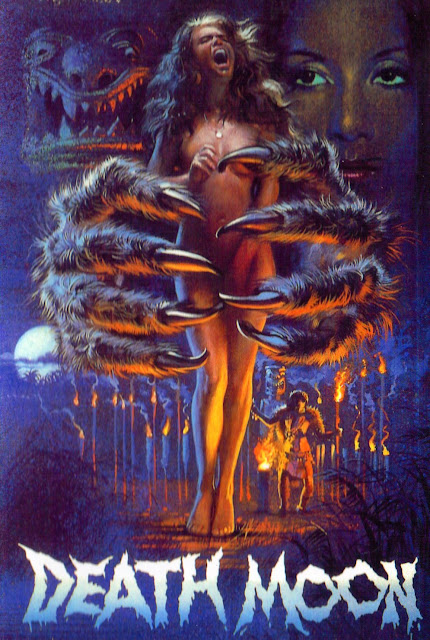 Ha ha, it’s Burl here with another TV movie for you! Boy, I’ve never watched so many TV movies as I have since beginning this movie review blog! I don’t know why, but I’ve really been enjoying the suckers! I suppose it recalls a time in my life when movies like Curse of the Black Widow and Cruise Into Terror and This House Possessed and Snowbeast were about all I could watch, since I was too young to go to the movies by myself and there were no VCRs yet!
Unlike those other movies I just mentioned, Death Moon is not a picture I recall from the heady days of my youth, even though it was apparently broadcast in late May of 1978, which should have placed it right in my prepubescent crosshairs! Perhaps it simply wasn’t broadcast in my region! Or maybe the tumblers of fate weren’t going to click into place until I was good and ready to accept the full, fierce beauty of the movie’s concept: a Hawaiian werewolf!
Ha ha, you read that right! Robert Foxworth, whom we know so well from Prophecy and – well, that’s about all I know him from, besides his small role in Damien: Omen II and maybe his appearance in that other TV movie It Happened at Lakewood Manor, a.k.a. Ants! – plays Jason Palmer, one of those overstressed businessmen who’s always waking up shaking and sweating from accursed dreams involving a fearsome tiki! His sawbones recommends a vacation, and the next thing you know, Jason Palmer is in Kauai, wearing a tiny blue bathing suit and gamely seeking some relaxation!
But as Jason begins his program of relaxation by squiring about a blonde businesslady, and as Rick, a ladies’ man hotel detective, chases a burly room thief, the werewolf attacks begin, and people are being torn apart all over the place, a fresh outrage each night! Ha ha, it goes on for a week or so, and that’s a lot of full moons! The house dick (who with his Ken doll face and receding hairline looks like a perfect telepod cross between Crown International superstars Bill Adler and James Daughton) begs the local cop to be allowed to help solve the murders, but everyone tells him to concentrate on catching the room thief! But when the room thief becomes a werewolf victim, Rick is able to turn the full force of his investigative prowess on the case!
The unfortunate room thief, by the way, is played by Charles Haid, whom we know from Ken Russell’s great Altered States! It’s funny: Haid is so good at playing a bigmouth blowhard, and here he is in a role which gives him no lines at all, until his werewolf encounter anyway, and then he only screams! And he’s the most unsubtle sneakthief ever, too! Ha ha, he wears loud shirts, smokes a stogie and weighs about two hundred and fifty pounds, and you have to consider that Rick might be a bit of an idiot not to have been able to catch him!
He also doesn’t think there might be a werewolf loose despite coming face-to-face with the leisure suit-wearing fiend in the movie’s finest scene! Ha ha, it only lasts a second, but it’s worth a rewind on the ol’ VHS to see Rick’s lycanthrope encounter one more time, I can tell you!