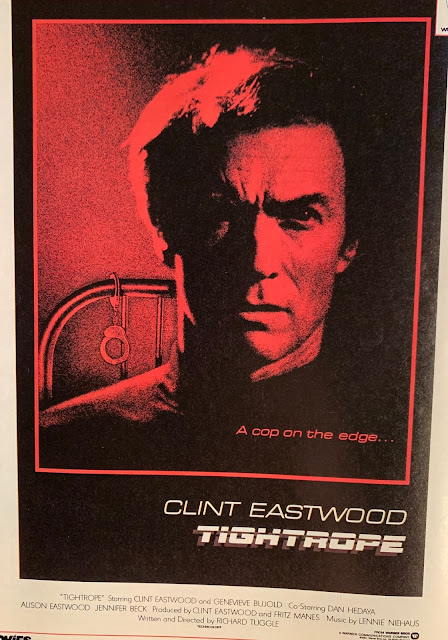 Burl here, with just a touch of Clint! You know, when people think of Eastwood playing a police detective back in 1984, they’ll usually have Sudden Impact in mind! Ha ha, “Make my day,” and all that! (I’ve never actually seen that movie, now that I think of it!) Not many recall how, that same year, old Clint took a step away from Dirty Harry (but not too big a step) and, as Detective Wes Block, took a ride on the sleazy side! Ha ha, the resulting movie was and is called Tightrope!
We open as a Puma-wearing killer in a cop uniform is terrorizing the city of New Orleans with a mad-dog campaign of rape and murder! The crimes are real downers, frankly, but we are mostly spared the actual murder scenes and thankfully spared the rapes entirely; over and again we get the build-up, until the killer springs out from somewhere or pops up in a weird mask, and then we cut right to the discovery of the body! That’s fine with ol’ Burl, as I wasn’t much in the mood for sex-crime stranglings when I recently watched this!
Wes Block, meanwhile, is a crusty murder detective, divorced, with two precocious daughters and a house overrun by garbage-eating street dogs! He’s in charge of solving the killings, but frankly, despite the surfeit of scenes in which Clint barks orders at his staff of underlings, it’s his loyal right-hand man Dan Hedaya (whom we recall from Commando and Buckaroo Banzai) who seems to do most of the work! The killings continue while Block’s daughters chatter a lot and eat Donkey Kong cereal! Wes is distracted from both them and from the killer when he suddenly descends into a red-neon world of sexual perversity and transactional love, and simultaneously begins a tentative romance with anti-rape activist and amateur kinkster Genevieve Bujold! Ha ha, we may recall Bujold from her curiously similar role in Dead Ringers!
The murders continue, and the police are desperate enough to pull in midget oil wrestling referees on the chance they might be the powerfully-built strangler! The pressure starts to chip at Block, and he suffers scary nightmares in which he turns out to be the killer; bourbon benders that terminate only when he falls insensate off the couch clutching a bottle in one hand and a came-with-the-frame style photo of his former family in the other; and half-eaten meals of fried chicken and Perrier! As Block has repetitious conversations with an especially chatty coroner, the killer moves in, peeping on Block’s intimate business moments, killing prostitutes which Block himself has engaged, and first threatening the older daughter (that is, the one played by Clint’s own daughter Alison), then going after Bujold!
I saw this way back in the old VHS days, and have ever since thought of it as being moody and atmospheric, but it turns out I was really just thinking of the poster! In a more recent viewing it felt to me much more conventional, with the red-light sleaziness - the nude strangled dead ladies, the mild kink, the oily sexual encounters - feeling slightly grafted on, with the seams showing in Frankenstein Monster style! The sweet if largely unwarranted love the cereal-munching daughters have for their frequently absent, generally untrustworthy and almost psychotically stoic dad is meant to stand especially athwart the luridness, and I suppose that aspect of the picture works just fine!
The writer and ostensible director was Richard Tuggle, who had written Escape From Alcatraz for Eastwood, and later directed Out of Bounds for Hall Jr.! Tuggle takes us on a dogged but unflashy checkmark tour of the Big Easy: Bourbon Street, a warehouse full of crazy parade characters, one of those aboveground graveyards, and a Halloween parade standing in for the usual Mardi Gras! Only swamps and voodoo are absent - this is not The Skeleton Key after all, ha ha!
The killer, whose trademarks include red strangling ribbons, handcuffs, scraps of doggerel sent to his favourite police officer, and, oddly, the habit of making and drinking cups of coffee while engaged in his rape/murder sessions, is an especially dislikeable jerk, and one is well pleased to see him mangled by a train, his severed hands still clutching at Clint’s neck! Ha ha, a dedicated strangler to the end! As a suspense picture it’s sort of middling, and as a Clint picture too it sits in the middle of the pack; it has a couple of ok scenes and a lot of claptrap; and one has a difficult time imagining a series of Wes Block pictures! I give Tightrope two cease-and-desist product placement requests from Puma!