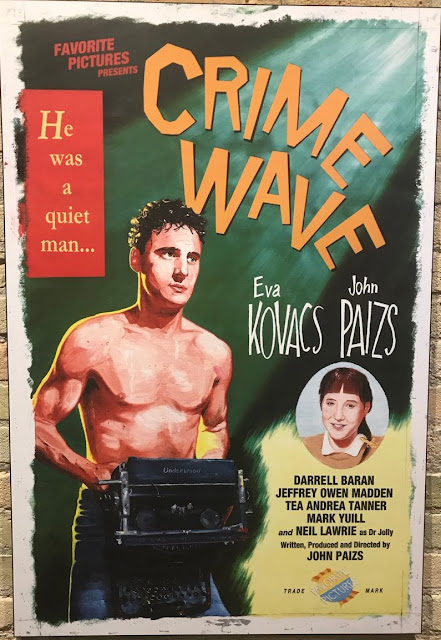 The top! Few reviewers ever reach it, but here am I, Burl, with a review of the movie Crime Wave for you! Ha ha! Now, mind you, this is not Sam Raimi’s sophomore picture, which I believe in any case is called Crimewave, but rather an earlier, cheaper, and even more eccentric picture made in Winnipeg, Canada, over several years in the mid-1980s by a fellow called John Paizs!
Even though the movie got its widest release on a VHS tape for which it was retitled The Big Crimewave, and indeed that was the tape that I watched, be assured that the movie is indeed simply called Crime Wave! The picture tells the tale of a struggling screenwriter who specializes in “color crime” movies; or, rather, he specializes in the beginnings and the endings of “color crime” movies, and the boring stuff in the middle is what he’s unable to write! So much of the picture depicts the different beginnings and endings he comes up with, and the rest is about his struggle to fill in the gap between!
So if you like struggling-screenwriter pictures, Crime Wave has got that covered! Our struggling screenwriter is called Steven Penney, and he’s played by none other than Paizs himself! He gets called “a quiet man” by his tweenage chum, and this is because he doesn’t utter a single word throughout the picture! No, not even when he meets the psychotic script doctor, Dr. Jolly, who’s played in a show-stoppingly demented performance by Neil Lawrie from Mob Story!
It’s a little like an Edgar Ulmer picture, specifically one of the weirder ones, Strange Illusion for instance, but with a dash of gore, nudity, weirdness and swearing thrown in! Ha ha, it was clearly done on a penny-poor budget, and is the more impressive for that! Plenty of imagination is ladled atop the story, and the occasional bum performance or sour mash on the screenplay is a small bird to pay for the many pleasures the picture offers! It’s got laffs: that you can bank upon, and real laffs in a motion picture are nothing to ka-choo at these days!
I’m very fond of this odd little movie, which sits awkwardly at on the bench at the side of the gym during the grade seven dance along with fellow weirdos Big Meat Eater, Lobster Man from Mars, and, sure, Sam Raimi's Crimewave! (Ha ha, The Human Mule wasn’t even allowed into the dance: the principal said she smelled whiskey on his breath!) I give Crime Wave three Greatest American Hero costumes!