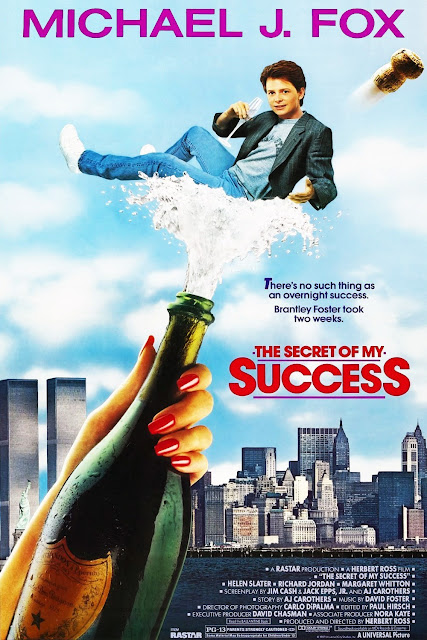 Hi, it’s Burl here with a secret – ha ha, The Secret of My Success, that is! Yes, I’ve finally taken the leap and watched this Reagan-era Yuppie office-tower comedy, in which I previously had very little interest! I didn’t suddenly develop an interest, we should note; it was more that an opportunity to watch the picture came along, and I took it!
There were many boardroom comedies made in the 80s, as befits the business-friendly attitudes of the decade! We had Big Business, Head Office, Beer, and a few others as I recall, none of which I ever bothered to watch! Ha ha, I guess it’s just not my genre! But as Roger Ebert and others have pointed out, The Secret of My Success belongs equally to the same category as the glossy Universal boardroom comedies of the 1960s, which usually featured Tony Randall! Ha ha, this picture is a Universal product as well, so I guess it makes sense!
Michael J. Fox, perhaps best known from Teen Wolf, plays Brantley Foster, a corn-fed youth with a business degree from the local cow college! He leaves the farm for New York, where he has a genuinely soul-wrenching time of it – unexpected tribulation in a breezy genre like this, ha ha – until one day he convinces his hard-bitten third uncle twice removed, a nasty capitalist played by Richard Jordan of Dune and The Mean Season, to hire him on in the mail room of the vast company he runs! But after he espies a junior executive Princess Di simulacrum essayed by Helen Slater from Ruthless People, Brantley decides he’s got to move up in the company! He takes over an empty corner office and, through a deft  combination of memo-sending and rapid changes of clothing, assumes the role of Carleton Wisecracker, the newest grey flannel suit in the building! Ha ha!
What follows are mild variations on sex farce routines, with Carlton/Brantley beginning an affair with the boss’s lady-wife and constantly changing his clothes in the office or the elevator, while also trying to evade his tough mail room boss (played by Christopher Murney from Maximum Overdrive)!  Brantley/Carlton has a mail room pal played by John Pankow from To Live and Die in L.A., and, though I spent the entire movie waiting for him to appear, we do eventually get a touch of Fred Gwynne! There are also about a million montage sequences set to the worst songs the decade had to offer! I mean really awful, stinky songs, of which 'Walking on Sunshine' is probably the best, which should tell you something!
Montages aside, it’s entertaining enough in a mindless 80s way, and Fox, while asked to do plenty of the smirky, cocksure, ain’t-I-a-stinker fiddlefaddle typical of the young male leads of that decade, maintains his Edmonton charm! It’s a harmless movie precisely because the fulsome support it gives to its desperate ladderclimbing hero, and its prostrate fealty to the executive class (bad apple Jordan aside), are so outrageously transparent! Nothing unexpected either happens or doesn't happen in this picture, and whether or not that sounds like a recommendation depends on you! Ha ha, I give The Secret of My Success one and a half bodybuilder poses!
Posted by Burl at 23:02