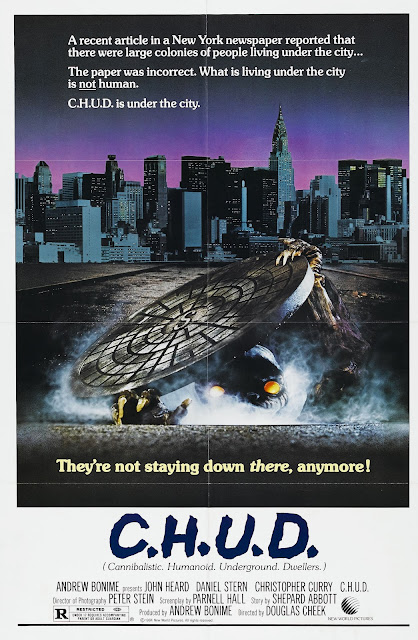 Hi, Burl here with a review! Ha ha, I’m still playing catch-up, so I’m going to review movies as though the chuds were on my tail! Yes, it’s true, I watched C.H.U.D. again recently, and was reminded of the times I watched it as an adolescent and appreciated the mid-low-level New York horror rung on which it sat – lower rungs of course being occupied by movies like Basket Case and Street Trash and Troma films, and the higher by, oh, I guess The Sentinel and stuff like that! Rosemary’s Baby would be at the peak of this ramshackle pyramid I’m attempting to describe!
What I’m talking about are not only budgetary considerations, but a level of street grime that renders the horror sort of realistic in a Big Apple sort of a way! C.H.U.D., which largely takes place among the street people and soup kitchens of the city, as well as beneath it in the sewers, achieves a very tangible level of grot, which is probably its most valuable asset!
It’s a story of monsters, ha ha! These entities, with their lighbulb eyes and obvious halitosis, lurk in the sewers, tragic mutations created thanks to the radioactive waste stored beneath the streets, which renders ordinary subterranean hoboes chudlike! Above grade we find a photographer played by John Heard from Too Scared to Scream and Heaven Help Us, and an activist for social justice played by Daniel Stern from Get Crazy and It’s My Turn, and a cop called Bosch, played by Christopher Curry from F/X! There’s also the terrific Kim Greist, from Brazil and Manhunter, as the photographer’s ladyfriend!
There’s an almost Jaws-like quality to the relationships between the trio of males! Heard is our Roy Scheider, gaping around at the strange new waters he’s navigating; Stern, the hippie street preacher, takes the part of the sharp, likeable younger man, bearded and iconoclastic; and Curry is the blustering captain! Dotting the film also are such familiar faces as John Bedford “Trading Places” Lloyd, Frankie ”Maximum Overdrive” Faison and Jon “Miller’s Crossing” Polito! Ha ha, even John “Matinee” Goodman shows up at the very end, only to become chud-chow pretty quick!
But the real stars of the picture are the piranha-mouthed chuds! They don’t actually spend much time on screen, these old boys, and it might have been nice to spend a little more time with them! At the same moment, while I’m strangely fond of the creatures, I don’t blame the director for trying to cut around them!
A little more pep in the direction, and in general, would have been nice, and the atmosphere is undeniably one of actors slumming; but this is in many ways a superior iteration of the 80s rubber monster genre, close kin to The Outing, Rawhead Rex, The Kindred and Pumpkinhead! I’m going to give C.H.U.D. two half-bums!
Posted by Burl at 00:16