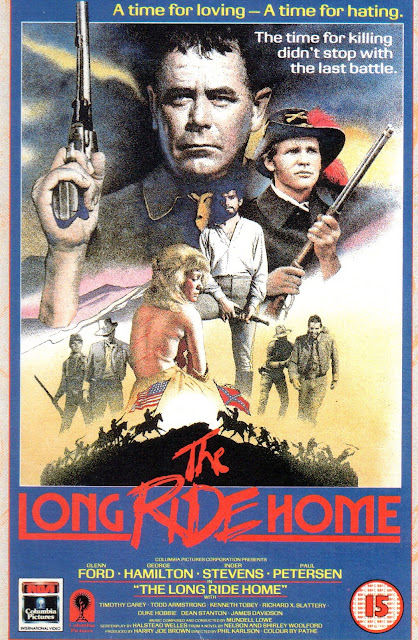 Yippee-ki-yay-hi, it’s Burl! Yes sir, it’s time to review a Western picture, or at least a Civil War movie that is more or less a Western! This one is called The Long Ride Home, or sometimes A Time For Killing, and it’s one of those movies that suffered from what’s known as “production problems!” It started with Roger “Rock All Night” Corman as the director, but he quit or was fired (accounts differ!) a few weeks in! He was replaced by Phil Karlson, certainly a man who knows his way around a tough-guy picture! So it didn’t turn out so badly! And thanks to Corman’s involvement, this movie contains a performance from my favourite actor, Dick “Smokey Bites the Dust” Miller! Ha ha!
We’re at a fort somewhere in the South in the last days of the conflict, in the spring of 1865! Union soldiers have a bunch of Confederate prisoners, including George “Love At First Bite” Hamilton and Harry Dean “Repo Man” Stanton, and also Jethro himself, Max Baer Jr., who of course is well known for directing Hometown U.S.A.! Ha ha, a pretty odd crew, all in all! On the Union side you’ve got Glenn Ford of Happy Birthday To Me, the great fartiste Timothy Carey, Kenneth Tobey from It Came From Beneath the Sea, a comedy-relief duo played by Kay E. Kuter and a bearded Dick Miller, and a friendly appearance from the young “Harrison J. Ford”! Ha ha, an even motlier crew!
The bluecoats, led by an intransigent colonel, make no friends by botching an execution! The decent Glenn Ford opposes it, but there’s nothing he can do! Hamilton and his boys have had enough: they escape through a tunnel and make their way towards Mexico, and freedom! But there are complications: G. Ford has a missionary fiancée played by Inger Stevens whom he sends away by wagon train, and Hamilton does first a kidnapping on her and later a violation! Meanwhile, Max Baer Jr. is a real maniac, a giggler who goes kill-crazy! Ha ha, gotta get those bluebellies! And Hamilton decides his main mission is to kill Glenn Ford, and he won’t even let the official end of the war stop him, ha ha!
It’s a pretty violent movie, that’s for sure, with lots of popguns firing wildly! It’s no The Wild Bunch, but there’s still plenty of tomato paste! In the middle of all that, and amidst the brooding, the rape, the thirst for revenge, sits a pair of comic performances from Miller and Kuter! Ha ha, they’re pretty funny guys, and it’s a welcome sight whenever these two scalawags appear on the screen!
If you try not to think of The Wild Bunch (an immeasurably better picture) while you watch it, The Long Ride Home is not half-bad! It’s not the jolliest motion picture ever, but it has an authentically liberal outlook, evidenced by the hero’s dislike of war, guns and killing, and the fairly perfunctory nature of his revenge when it finally occurs! Also, you have to admit it has at least one thing The Wild Bunch can’t even touch, and that’s Dick Miller! Ha ha, I give The Long Ride Home two and a half Dean Stantons!
Posted by Burl at 13:30