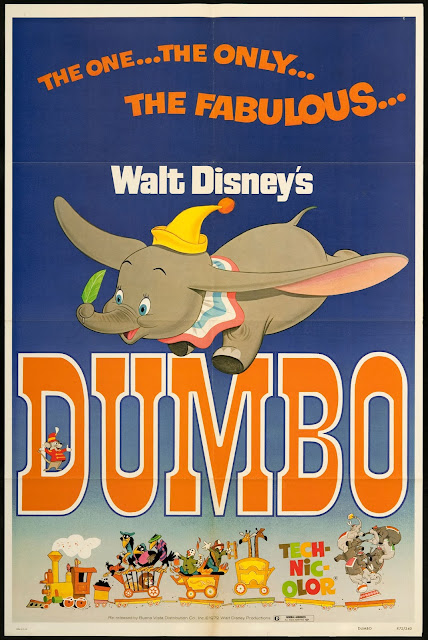 Rootin-tootin-scootin, it’s Burl! Ha ha, I’m here to review a classic in animation for you, the fine Disney picture Dumbo! Ha ha, you’ve all seen it, I’m sure, but I hadn’t! Not until recently anyway! I’d certainly seen bits of it, like the parts General Robert Stack weeps over during his screening in 1941, but that’s about it!
The biggest surprise I found in the picture was that Dumbo doesn’t really fly until the end! I thought his flying would be a big part of the movie, and that he would have many flying adventures! Maybe they were saving those for the (ha ha, non-existent) sequels, and this was meant as more of an origin story!
And indeed it does begin with his origin: in point of fact, delivery by stork! The particular stork delivering Dumbo is an elderly slowbones, a little muddle-headed, and his slack performance causes needless grief for dowdy Mrs. Jumbo! Dumbo – whose real name, Jumbo Jr., is quickly forgotten – finds himself in a world of nasty lady elephants, unfeeling clowns, a self-obsessed ringmaster and, thankfully, a good-hearted mouse! When Mrs. Jumbo goes ape trying to protect her offspring’s good name, she is locked up as mad, and the mouse becomes Dumbo’s only friend!
The movie doesn’t overdo Dumbo’s tribulations, I’m glad to say! Neither does it condemn his episode of accidental drunkenness! In fact, had Dumbo and the mouse not accidentally imbibed clown champagne, they never would have discovered his magical flying powers in the first place!
The movie is full to bursting with beautiful circus imagery and great character voices! Ha ha, that mouse is marvelous! Even the songs are pretty good, and not too numerous! I would echo Sigfried Kracauer’s critique of the picture though: the famed theorist complained that, while Dumbo might well have used his power of flight to soar off “toward some unknown paradise,” he instead chose to remain “the highly-paid star of the same circus director who once flogged his mother Jumbo.” Though the obvious answer is that Dumbo is choosing to remain with his mother and only incidentally with the circus itself, it still does seem as though one of the movie’s takeaway messages is that forgiveness can be bought with perks and comforts! And the rest of the animals still must dwell in their cramped quarters, after all!
The movie is a little thin, maybe – Dumbo never speaks a word in the picture, so as a character he’s a little lacking! Ha ha, but the garrulous mouse, the bumptious crows (whose Negro coding, while sympathetic, is the movie’s most outdated element), the bi*chy elepantresses and the deluded ringmaster all help to make up for that doughnut hole!
It’s a terrific picture overall, brisk and breezy at 64 minutes, beautiful to look at, frequently clever and often charming! Casey Jr. is a marvelous little train, too! I’m going to give Dumbo three faceless roustabouts!
Posted by Burl at 12:33